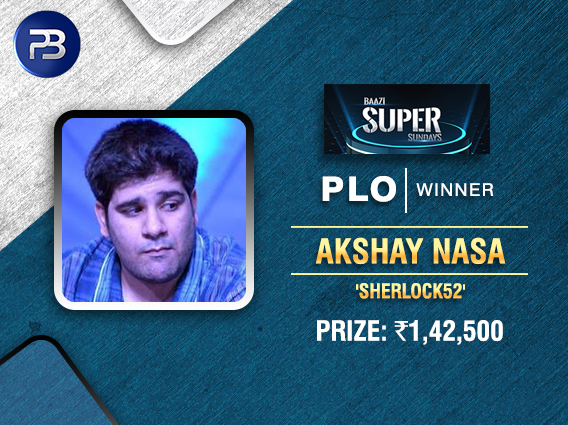 
Here are two names that are very well known in the Indian poker industry.

One name is PokerBaazi. This brand is among the top Indian poker companies, often hosting high-value tournaments and big promotions that attract some of India’s best players. Yesterday in particular, being the weekly Sunday grind, was a good day for the company.

The second name is Akshay Nasa. If you talk about the biggest online poker tournaments, his name has to come to mind, as he’s a regular money finisher in major tournaments, be it on The Spartan Poker, PokerBaazi, Adda52, or any of the other top platforms. Yesterday, he added another achievement to his tally.

He registered to the INR 5 lakh GTD BSS PLO tournament on PokerBaazi, which is a part of three tournaments that form the Baazi Super Sundays (BSS) promotion that gives away INR 25 lakh each Sunday. By the end of the tournament, Nasa had won and added INR 1,42,500 to his poker bankroll.

The tournament saw a total of 114 entries, including 67 unique players, which led to the guarantee being passed and a new prize pool of INR 5.7 lakh being generated. Nasa won the biggest share of this prize pool after he beat ‘TOPGUN79’ in heads-up, ending a 5-hour and 9-minute grind.

A total of 11 players were paid out a minimum of INR 14,250 and TOPGUN79 was paid INR 1,08,300, rounding out the top two players who scored 6-figure prizes. Gutshot caught up with Nasa after this victory and he said, “It was a special win for me, as I don’t play PLO much. Taking down the tourney made me happy.”

Nasa then went on to make his night even more special by finishing second in the Adda52 Millions for INR 3.8 lakh. Keep reading GutshotMagazine.com for more updates on yesterday’s Baazi Super Sundays as well as updates from other Sunday grind tournaments.