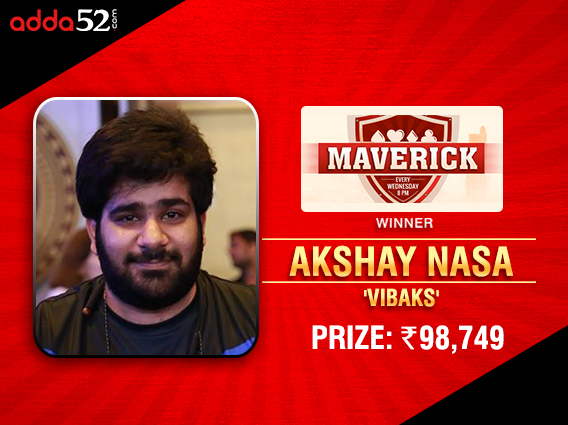 Akshay Nasa is Adda52’s Maverick of the week


So, there are a few poker players in the Indian circuit that have made up their mind to take down every possible major tournament they can across the various platforms available in India, live and online. One of these players is Akshay Nasa, a player whose poker achievements just keep growing by the day.

Not many times can Gutshot go by an entire week without mentioning Nasa in one of our posts. As the number of live tournaments in our country are on the lower side, Nasa ensures he’s always among the top names in online featured tournaments. Yesterday, he added another feather to his cap, winning the Maverick on Adda52.

Adda52 added a few new tournaments to their weekly line-up and Maverick is one of them. It has hardly been a couple of weeks since the tournament debuted on their platform and Nasa already has one title under his belt. The Maverick INR 6 lakh GTD had a buy-in of INR 1,100 and Nasa, playing under the name ‘vibaks’ on Adda52, shipped the tournament after a heads-up deal.

The 8pm start went on for quite a while before the final two players came to an agreement at 3:18am this morning. Nasa was up against ‘bhagwanbhakta’ in heads-up and had an ever-so-slight chip lead at the time of the deal. This allowed him to get the higher prize of INR 98,749, while bhagwanbhakta took home INR 98,326 for finishing second.

A healthy field of 568 entries registered to the tournament and from these, the top 31 places were paid out with a minimum cash prize of INR 6,525. Those finishing in the money didn’t include too many top pros, so this wouldn’t have been Nasa’s toughest poker competition ever. For a look at his recent achievements, click here.