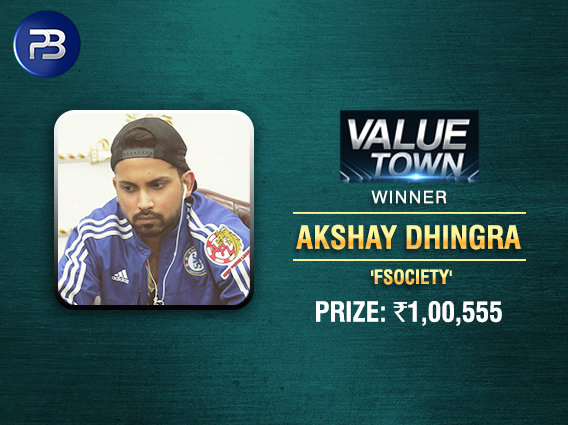 
The top poker companies have high-value tournaments taking place online every day of the week and last night was no different on PokerBaazi, with the INR 5 lakh GTD ValueTown tournament being hosted. Here, players have the chance to win big with a buy-in of just INR 550 and hence the name, ValueTown.

The tournament began last night at 9:55pm IST and came to an end 5 hours and 45 minutes later. There was a massive field of 1,183 entries registering to the tournament and the player who eventually came out on top after this long grind was Akshay Dhingra who plays under the name ‘fsociety’.

The guarantee was also beaten, and a new prize pool of INR 5,91,500 was created, with Dhingra beating the field and taking home the top prize of INR 1,00,555. Sacrificing a little bit of sleep wouldn’t have hurt too much as the player made a good addition to his poker bankroll early this morning.

Gutshot caught up with Dhingra after he shipped this tournament on PokerBaazi, to ask him about the overall experience. He said, “Well, I entered the tournament with the free ticket using the deposit code on Baazi, which was a pretty sweet deal. I started the tournament from the beginning and it turned out be a 7-hour grind, but it was totally worth it. I kept trying to play my A-game throughout the tournament.”

“I made some mistakes along the lines but quickly recovered from them and overall, the experience was thrilling throughout, and then shipping it surely was exciting. PokerBaazi has got a pretty decent tournament structure throughout the week and the new tournament ValueTown is a steal for the buy-in price,” he added.

Keep reading GutshotMagazine.com for similar updates on the biggest and best poker tournaments in India, both online and live.

Don’t have an account on PokerBaazi? If you wish to play and become the next big winner on their new platform, sign-up now by clicking HERE.