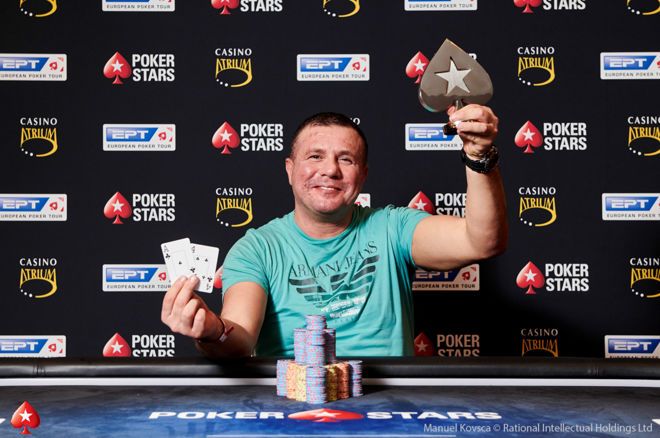 
PokerStars is a big brand in the worldwide poker industry, hosting live tournaments all over the world. Their European Poker Tour (EPT) is currently underway at the Casino Atrium in the capital city of Prague, Czech Republic. The series started on 7th December and will go on till 18th.

The festival is studded with plenty of action-packed high stakes events, starting with the EPT National and going down the timeline with EPT Super High Roller, EPT Main Event and the EPT High Roller.

The EUR 10,300 NLH Event kicked-off on the first day of the festival. It attracted a modest field of 38 entries and the crowned champion to emerge yesterday was Turkey’s poker ace Akin Tuna, who took home the 1st place cash prize of EUR 125,330 (~INR 1.02 Crores).

With more than $8.5 million in total live earnings, Tuna is not exactly new at cashing out big. But this win at Prague is his first ever recorded title finish, having missed twice previously by a hair-length, including his 2nd place finish at the 2012 EPT Dublin EUR 10,300 High Roller, which also makes it his biggest live cash yet of #$323,134.

The 8-handed event saw its Final Table yesterday. It didn’t take much time for the adrenaline to start flowing. Orpen Kisacikoglu shoved his last 15 big blinds with pocket Fives but got eliminated at 5th when Bulgaria’s Ognyan Dimov took the pot with pocket Tens.

The heads-up arrived soon between Dimov and Tuna. In a decisive hand of heads-up, Dimov limped in and called a raise to 61,000 to which Tuna replied with a check on the flop of 9c 7c 5c. Dimov bet another 85,000, and Tuna called. They both checked the 9s turn. On the Qh river, Tuna thought long enough by using an extension and then bet 245,000. Dimov snap-called. Tuna showed his 9h 9d, making Quads, and Dimov showed his 8s 6c for a flopped straight.

The last hand saw Dimov with only 35,000. He got them all in with Jd 6c against Tuna’s Ac 4c. Dimov turned a straight on 10d As Qc Kc but the river of Jc gave Tuna the winning flush and the trophy. “Good game, nice playing with you” Dimov was quoted as he embraced Tuna.