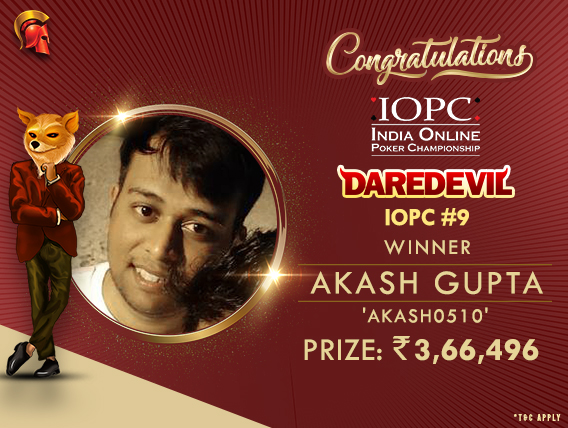 
The Spartan Poker is one brand in the online poker industry in India which always one ups others by hosting high value tournaments which give out staggering prizes. Such is the case with India Online Poker Championship (IOPC) which is underway as we speak and will see its Day 4 today. The series has a total guarantee of INR 8.5+ Crores in cash prizes up for grabs. There is also the IOPC Leaderboard which has a Skoda Octavia for the winner.

After a big bang in IOPC Day 1 which saw 5 events being conducted and saw well-known Abhinav Iyer ship the Elite, Day 2 of the series was pretty successful and saw a huge turnout like the previous day too.

The biggest tournament of Day 2 was Spartan’s feature tournament of Saturday – IOPC #9 – DareDevil INR 15 Lakhs GTD – which attracted a 550-strong entry field, creating a fresh prize pool of INR 18,25,000, as has been the case in Day 1 too, where all tournaments exceeded their guarantee quite easily. The tournament also had re-buys at 50% less than the buy-in amount so it saw a decent number of those as well.

The tournament saw top 24 places being paid, out of which, the largest cash prize was won in a heads-up deal between the winner Akash Gupta aka ‘Akash0510’ and Siddhanth Kapoor aka ‘bullzeye’. The champion, Gupta, took home INR 3,66,496 as the lion’s share out of the deal and Kapoor had to settle for INR 3,35,217, a good amount, nonetheless.

Gupta is a known player and has previous online cashes, but this is a significant win and he’ll be looking forward to making the best of his new bankroll addition by using it in the exciting line-up of tournaments in the near future on Spartan.

Along with the DareDevil, there were four other events hosted on the platform in IOPC’s Day 2, which all surpassed its guaranteed amount, making it a high value affair. Among those, the INR 10 Lakhs GTD NLH was won by regular Anirban Das aka ‘pokernoob’ for over 2.5 Lakhs. Read the round-up of other four events here.

Sunday’s Millionaire 1 Crore GTD tournament also saw a staggering field so stay tuned to GutshtoMagazine.com for the Millionaire results as well as general poker news from around the world.