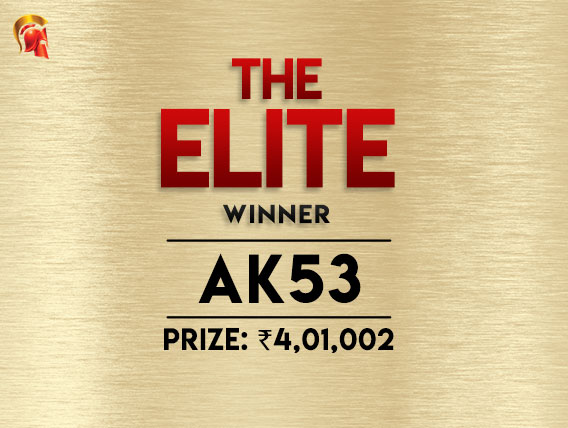 ‘Ak53’ wins the Elite at Spartan


The weekend kicks off in a big way at The Spartan Poker with Friday might’s feature tournament being the Elite, a no limit hold’em event which features a guarantee of INR 15 Lakhs. This tournament has a buy-in of INR 11,000 and plays as a 6-max format. Last night it was ‘Ak53’ who overcame the field to claim the title and first place prize of INR 4,01,002.

93 players took part in the tournament which after re-entries ended up having a field of 119 entries. That took the overall prizepool well past the guarantee to close at INR 18.3 Lakhs which was distributed among the 17 finishers. It took just under seven hours for the Elite to conclude and there were some familiar names who finished deep including well known pro Kanishka ‘Wildflower’ Samant (9th place for INR 45,950), ‘stupefy’ (11th place for INR 37,515) and recent Spartan Super Series PLO Highroller winner Vishal ‘vishaltulsya’ Tulsyan (15th for INR 30,195).

Wildflower’s exit was followed by a couple more knockouts and that brought us to the final table of the Elite. From 6-handed to three did not take too long but 3-handed action went on for a while between Ak53, ‘Smokijoejr’ and Bangaluru’s Vinay B a.k.a ‘Minimalist’. The latter has put in some strong performances in recent weeks scoring numerous deep finishes and titles. So it was not surprising that It took over 100 hands to get this one where Minimalist was railed. Ak53 was comfortably in the lead with 1.6 million chips with Smokijoejr holding 841k and Minimalist with 240k. It was a preflop all-in situation with Smokijoejr (Tc Th) calling off Minimalist’s (As 6s) shove. No joy for Minimalist on the board Qh 9h 6c 7c Kh and he would exit in 3rd place for a payday of INR 2.02 Lakhs. Ak53 and Smokijoejr traded a few pots before they decided to call it off and talk out a deal. That give Ak53 the title and a 4 Lakh payday while Smokijoejr got INR 3.70 Lakhs for his runner-up effort.

Stay tuned to GutshotMagazine.com as we bring you daily updates of featured tournaments from the live and online poker worlds.