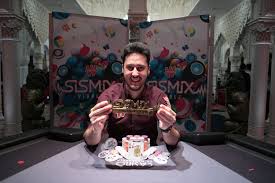 The final day started with 17 players to 13 in just half an hour. Mateos had the chip lead going into the final seven players. Mateos was dominant on the final table till the table reached to final four and then there were ups and downs with the clash of Kings. After a 75-minute dinner break, the heads-up players resumed with 104 BB’s. Mateos opening an aggressive play for Henrique Pinho where he four-bet jam on the flop and both the players flopped a pair, Pinho shoved post-flop and Matros took over on the turn and on the river.

After the win, “I love the game, so studying doesn’t really take that much of an effort. One of my goals is to play my best every day, and so I came here to try and play my best game and it worked.

I mean, it’s not 100k motivation,” he said, “But one of my goals is to play my best every day, and so I came here to try and play my best game – and it worked!”

Belgian professional poker player said, “It’s amazing that every two years there’s a Winamax player that wins. I don’t think anyone will do it again! It’s nice; Adrian is an amazing player. He’s the best player in the field, and he won. That shows that poker is not about luck!”