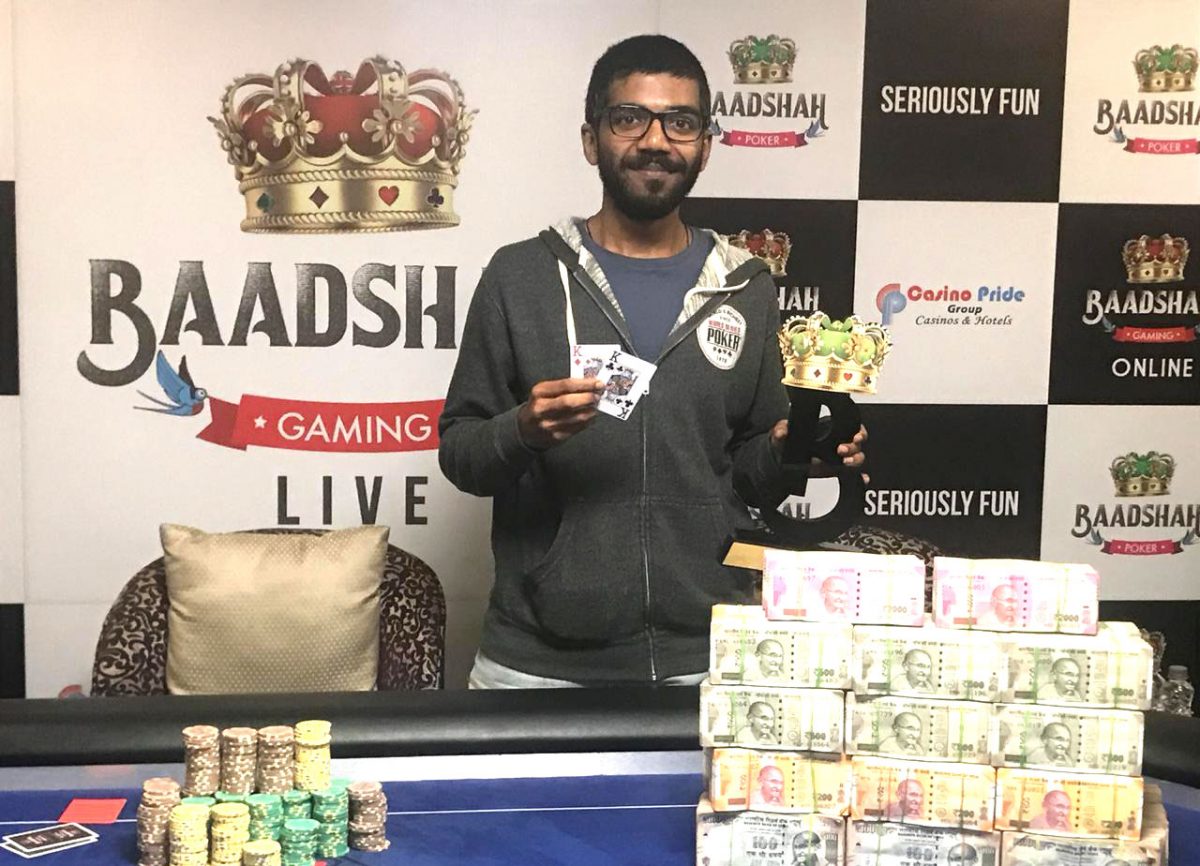 
What a ride it has been at this Baadshah Live Series! Today saw the culmination of the 35k Main Event and outlasting the 94 entries was Aditya Sushant who scooped up this Main Event title along with top prize of INR 8.85 Lakhs (post a heads-up deal). Sushant defeated Guneet Singh Kwatra in headsup battle and the latter claimed INR 7.15 Lakhs for the runner-up. Sushant is famous on the Indian poker circuit for winning India’s first World Series of Poker gold bracelet last year. Tonight’s win is also significant as this is his second Main Event title at Baadshah Live Tournament Series, having won this same title in the inaugural edition as well. Sushant started off well in the series and a sixth place finish in the opening Bounty event was certainly a sign of things to come.

Action at this Main Event took place first on 23 September where players got together online at BaadshahGaming.com to play Day 1A in an innovative twist to this tournament. Ashish Munot led the stacks in that online flight and it was a sign of things to come for Munot who has had an extremely fruitful series here at the Pride Poker room in Panjim, Goa. He went on to claim the opening event i.e. 15k Kickoff, a bounty event outlasting 65 entries to claim the title. He then made another final table at the 75k Highroller although finishing out of the money in 6th place. And then he had another impressive run in today’s 35k BLT3 Main Event to claim INR 2,75,000 for his 5th place finish.

Second in chips to Munot in that online Day 1A was Shuchi Chamaria who was the only lady participant in this Main Event to make it through to Day 2. She managed to double her stack and become one of the chip leaders early on in this Main Event. Playing very solidly, Chamaria kept building up her stack and not surprisingly made the final table with ease as one of the top stacks. She would go on to finish in 4th place for a nice payday of INR 3,25,000. One of the upcoming players on the circuit in recent times, Chamaria has received training from one of the top names on the Indian circuit in Aditya ‘Intervention’ Agarwal who is also her husband.

Tathagata Sengupta was also doing extremely well at that final table having amassed a considerable number of chips on his way to the FT. However, he busted out in 3rd place and took away INR 4.25 Lakhs. Heads-up came down to Sushant and Guneet Kwatra and the two struck a deal immediately. Kwatra had the chip lead for a long time during the day and had an overwhelming lead of 2:1:1 coming into 3-way play, before losing it all to Sushant in heads-up.