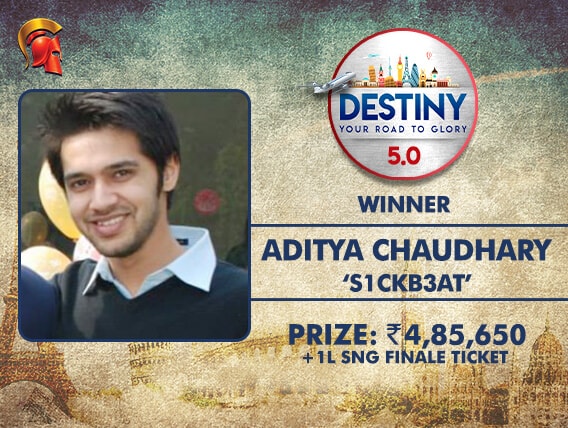 
The Spartan Poker recently launched the fifth edition of its signature tournament series called ‘Destiny’. After sending 4 Destiny series winners to Las Vegas, Destiny 5.0 came up with a new surprise of sending the ultimate winner not to Vegas, but to play in a prestigious live series in Europe!

Last night was the seventh Destiny tournament of the series, an INR 20 lakh GTD tournament with a buy-in of INR 5,500. This is one of Spartan’s most popular tournaments and it kicked off last evening at 8pm IST, with the guarantee being beaten once again. A new prize pool of INR 22.1 lakh was generated.

This was due to a heavy participation of 442 entries and the player to outlast these entries and ship the tournament was Aditya Chaudhary aka ‘S1ckB3at’, who took home a massive prize of INR 5,85,650. INR 1 lakh will be deducted from his winnings as an entry to the Destiny SnG finale, where he will play for a chance to go to Europe.

In the final hand, Chaudhary beat ‘dev3088’ in heads-up. Both players were all-in pre-flop and none were further assisted when the board opened Kc Kh Ah Jd 7h, and Chaudhary’s pocket Queens beat dev3088’s pocket Sixes. The latter took home the runners-up prize of INR 3,64,650. Also continuing his hot run was Rohit Sharma aka ‘SFTBNIAH’, who finished third here after already having won two titles on Spartan in July.

Gutshot caught up with the winner after this tournament. The poker player from Noida is 28 years old and completed his MBA from IMT Nagpur. He began playing poker on Zynga in 2008, where he was #12 in the world at one stage. He then moved to playing Rs.100 buy-in games with college friends. “I then moved to 5k buy-in games and was fortunate enough to be staked by a friend whom I had taught how to play. After my MBA, I started playing tournaments on PokerStars and Full Tilt. An ardent interest made me study more about the game and work hard on my game with a select group of friends who are experienced players and game science enthusiasts. We are working on a way to share helpful inputs with the poker community.”

Talking about key hands on the final table, he said, “I managed to make a big stack early on when I flopped a set of 4s on a J high board. My opponent held KJ and 3-bet shoved on the flop. There was a hand in the middle stages where I opened with KQ in early position and the BB defended. The flop came 7 5 2 and we went check check. Turn was an 8. Check check again. The river was a 4. My opponent led out for about 3/4th pot. I tanked for a while and made the call putting him on 10J, JQ, Q10, etc. He had 9 10. With about 60 people left and 40 paid, I was fortunate enough to get AJ on SB. I jammed, and the BB woke up with 88. I managed to river A J. On the final table, with 5 left, I had AQ (UTG). I opened and my opponent to my left 3-bet. The player in the BB had only 3 BBs left, so he also went all-in. I had the 3-bettor covered so I jammed, only to get called by KK. I flopped a Q and got extremely lucky to river another Q! It was only after this that I felt, maybe it’s my destiny!”

Keep reading GutshotMagazine.com for similar updates on major poker tournaments from India and around the world.