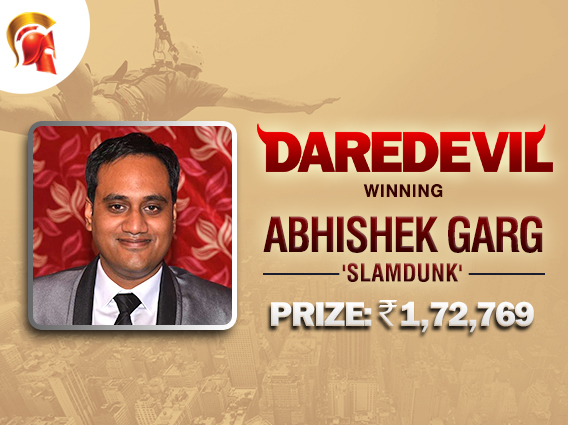 
The Spartan Poker is a brand in the Indian online poker scenario that hosts a variety of tournaments and series to suit all pocket sizes. They have been in the game for too long and have established themselves as one of the leading companies in the industry.

The winner to overcome the strong field and bag the 1st place title was the well-known grinder Abhishek Garg aka ‘SlamDunk’. He took home INR 1,72,769 after beating the runner-up Ankush Aryan aka ‘invinciblewolf’, who took home INR 1,59,828. They both made a heads-up deal based on their chip stack, which saw Garg take the lion’s share out of the prize pool.

Garg is by no means an unknown player, having recently added a major title to his name when he shipped The Summit for upwards of INR 3.2 Lakhs. The player, along with crushing online rooms, has also played in a couple of recorded live events where he cashed out, one of them being the 2018 WPT India Kick-Off event held in Goa recently, where he finished 6th for $2,097 (~INR 1.47 Lakhs). Garg is obviously very excited with this win and will be looking to carrying his gameplay forward into 2019 as well.

Keep reading GutshotMagazine.com for more tournament announcements, updates and general poker news from around the world.