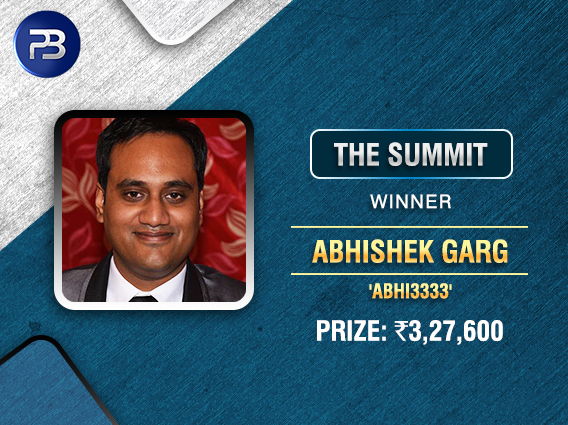 Abhishek Garg is latest to scale The Summit on PokerBaazi


The Summit MonsterStack Turbo INR 10 lakh GTD happens to be one of PokerBaazi’s most popular online featured tournament, which takes place on their platform every Thursday night at 8pm, in direct competition with other big Thursday night tournaments like The Flash on Spartan and Godfather on Adda52 (won by Kavish Kukreja last night).

The Summit has a steep buy-in of INR 8,250 and you know that such a high buy-in will attract some really good pros from across the country. Last night, it kicked off at its usual scheduled time and a total of 182 entries (including 80 re-entries) registered, which smashed the guarantee and generated a new prize pool of INR 13.65 lakh.

Once again, a very tough field was in play, with only the top 17 of them getting paid out eventually (min cash – INR 27,300). Among these were PokerBaazi regulars like Sriharsha Doddapaneni, Kartik Ved and Harsh Dembla, all of who took home min cashes. Making deep runs were Sahil Agarwal (11th) and Sahil Mahboobani (8th), as the competition got more intense as time passed by last night.

Eventually, the tournament got over at 2:19am this morning, ending a grind of slightly over 6 hours. Rounding off the 6-figure payments were Rohit Mishra aka ‘rohit22rm’ who finished 4th for INR 1,22,850. ‘jksisme’ was the next to hit the rail, finishing 3rd for a healthy pay-out of INR 1,63,800. Mishra also won the SSS Super High Roller on the same night on Spartan.

After this began the heads-up battle between Abhishek Garg aka ‘abhi3333’ and ‘goacartel’. The former has been a known name in the Indian poker industry since a while now, making the Final Table in the Kickoff Event of the recent 2018 WPT India series, which was won by Aditya Sushant. Garg has also been a part of the Poker Sports League.

He turned out to be the eventual champion here in The Summit on PokerBaazi last night, beating goacartel and taking away the sweet prize of INR 3,27,600. His heads-up opponent also took away decent prize amount of INR 2,32,050 for finishing second in this popular tournament.

We caught up with Garg after this victory to ask him about the experience. He said, “The tournament experience was excellent. The structure of the tournament is very deep which allowed me to stay patient and take spots. ‘CairyHunt’ (Sahil Agarwal) was on my table for a long time during the final 3-4 tables. He is one of the toughest players to play against. Overall, it was a good win”