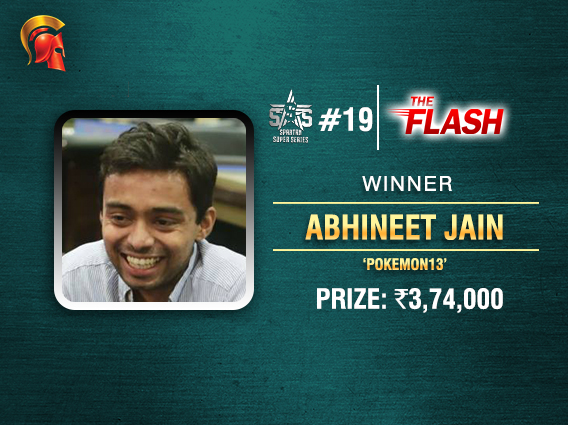 Another thing he is known for is winning Spartan Super Series (SSS) titles on The Spartan Poker. In the August edition, he picked up one title and then picked up two titles in the September edition of the SSS. Now, he has gone on to bag an SSS title in three consecutive editions.

Jain registered to SSS Event #19 The Flash INR 15 Lakh GTD last night – an INR 5,500 buy-in tournament which kicked off at 7:30pm IST. The mega guarantee was beaten, and a new prize pool of INR 17 lakh was created thanks to a field of 340 entries that registered to the tournament.

Eventually, the top 27 places finished in the money, sharing the prize pool with a minimum cash prize of INR 15,300. However, none of them took home a bigger prize than Abhineet Jain, who outlasted all the entries to win another SSS title and add a prize of INR 3,74,000 to his poker bankroll.

In heads-up, Jain beat ‘xodufonuwi’ when the tournament was at Level #45 with the blinds running at 9,800/19,600 – 1,960. Jain had created an overwhelming chip lead of around 27:1 and xodufonuwi had no other option but to keep shoving all-in in the hope of winning at least four or five flips.

In the final hand of the competition, xodufonuwi shoved in his stack pre-flop with a hand of 7s 6c and Jain happily made the call with Jh Ks. The board opened 4d 8h 9s 2h Jc and ran dry for xodufonuwi, while Jain hit a pair of Jacks on the river, giving him the pot and the SSS title. xodufonuwi had to settle for INR 2,53,300 for finishing second.