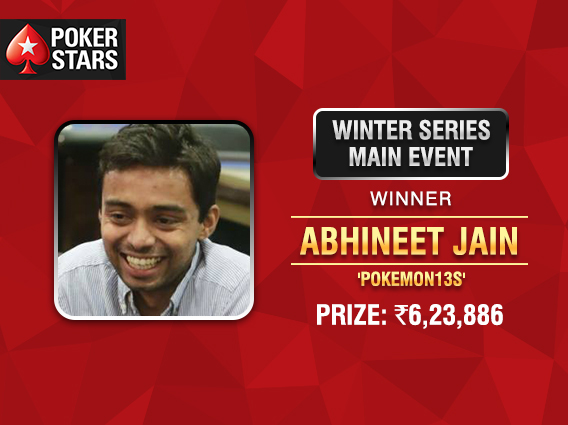 
PokerStars is one of the most reputed brands in the worldwide poker industry, having hosted plenty of action-packed tournaments and exciting series for a long time. Their PokerStars online platform is also the leading poker website in the world. With the presence of PokerStars India in the Indian market, they are gaining steam and hosting a lot of adrenaline-rushing tournaments and series to suit the Indian audience as well.

They also hosted the Diwali Rush series this Diwali and it became quite popular among the Indian poker masses. PokerStars India is also hosting Multi-Table Tournament (MTT) leaderboard as we speak, which has INR 5 Lakhs in guaranteed prize money every month.

They recently announced their Winter Series of INR 1.6+Cr GTD to run between Dec 16-24, which has just gone in the books successfully. The INR 35 Lakhs GTD Main Event of the series was hosted on Dec 23 with a colossal guarantee. The crowned champion of the crown jewel of Winter Series was the well-known grinder Abhineet Jain aka ‘pokemon13s’. He took home a sizeable 1st place cash prize of INR 6,23,886. He beat ‘shekharpetro’ in the heads-up battle, who took home INR 4,49,563.

The NLHE Main Event attracted a total field of 467 entries (174 re-entries) for a buy-in of INR 7,700. The competition to the top was intense for Jain, the eventual champion. He also witnessed another known and tough opponent PokerStars Team Pro Aditya Agarwal at the Final Table, but Agarwal busted at 4th place and had to settle for INR 2,33,432.

Abhineet Jain plays and ships online tournaments on various platforms. Among his recent wins is the Flash on Spartan for over INR 3.5 Lakhs. He is also an accomplished live player and has been in the scene since a lot of time. His first recorded live cash was finishing 12th in one of the events at 2015 India Poker Championships (IPC), Goa. He has cashed out a few times later as well, with his most recent finish being a 4th place finish in the Manila Super Series PLO Event back in October 2017.

With his fat pay-check earned for winning the Winter Series ME, he will be looking forward to play in more upcoming tournaments as well as live, having his bankroll boosted. 2019 is going to be an action-packed year in the poker world and he’s all-ready to cash out big. Keep reading GutshotMagazine.com for more such news as well as general poker news from around the world.