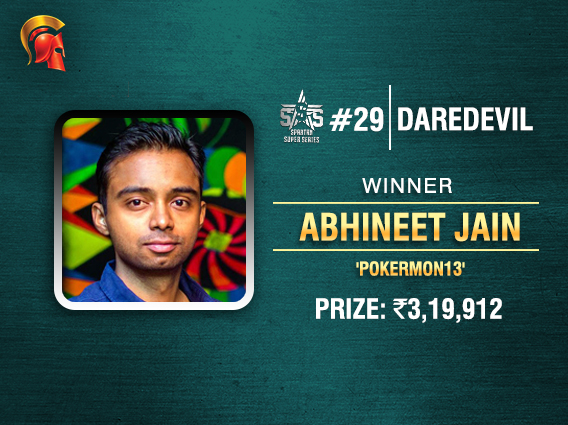 
The weekend is off to a good start for Indian poker players as the ongoing Spartan Super Series heads into its finishing stages and with that come the big value tournaments of the schedule including today’s DareDevil tournament or tournaments should we say. Earlier in the day at The Spartan Poker, we saw ‘Toogle09’ winning the ‘Lite’ version of the DareDevil and later on in the evening it was a familiar reg in Abhineet Jain a.k.a ‘pokermon13’ who scored a win in the regular version of this tournament.

Over 100 players, 107 entries to be exact took part in this tournament which featured a buy-in of INR 5,500 coupled with a juicy 10 Lakhs guaranteed prizepool. Those entries got the prizepool to INR 11,22,500 which would be shared among the top 12 finishers with an assured INR 25,256 going the way of all the money finishers. Arjanveer ‘instrumental’ Chadha continues his terrific run in this SSS edition with another money score although it was a min-cash in this tournament. Another familiar name was that of actor and DJ Siddhant ‘bullzeye’ Kapoor, who finished in 7th place for IRN 50,512. ‘karanmangla’ got eliminated in 3rd place (INR 1,51,537) when, in a preflop all-in, his two pair was no good against pokemon13’s set of Kings. That took pokemon13’s stack past the 1.5 million chip mark going into heads-up.

But despite the chip advantage, the going was not going to be easy because it was another veteran reg in Sumit ‘mrgr33n’ Sapra who stood between pokemon13 and his second title of this SSS series. mrgr33n had a stack of just under a million and was looking to score his third SSS title so a lot on the line for both players. pokemon13 was able to extend his advantage early on in heads-up when he rivered a two pair against the pocket Kings of mrgr33n. That left just about 350k with mrgr33n but being the savvy pro he is, did not let that deter him.

He managed to double up with a pair of Tens against the Nines of pokemon13 netting himself a million chip pot to even the stacks a bit more. pokemon13 kept the pressure going winning key pots to extend his lead and when it was about 1.5:1 is when the final hand took place. It was a classic race between the two finalists with pokemon13 (9h 9c) and mrgr33n (Qc As) going all-in preflop. No joy on the board of Jd 4d Td 6h 9d for mrgr33n as a set of Nines for pokemon13 gave the title and first place prize of INR 3,19,912 to Abhineet Jain. For his efforts, Sumit Sapra received INR 2,07,662.

Just a couple of more tournaments to go before this Day 6 round up of the SSS comes to an end so stay tuned to GutshotMagazine.com for all that and more.