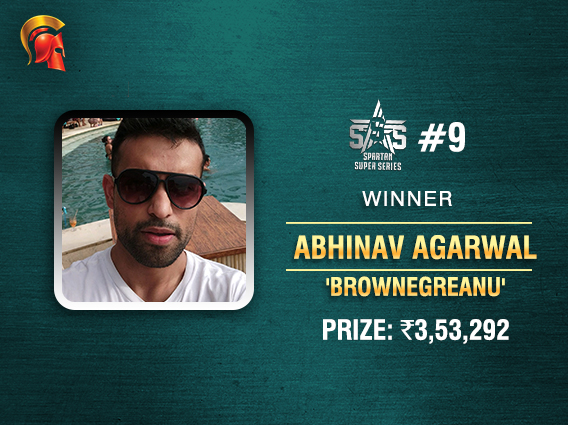 
Yesterday was the second day of the ongoing Spartan Super Series (SSS) on The Spartan Poker, where a total of INR 2.6+ crore is being given away in guaranteed prizes. 26 tournaments are scheduled for the series and 6 of them were contested yesterday, including the major INR 40 lakh GTD SHR and the SSS Event #9 INR 15 Lakh GTD tournaments.

The ninth event was the second biggest tournament of the day, after the SHR of course. It kicked off at 7:30pm last evening and ended at 12:33am this morning, lasting a few minutes more than 5 hours. With a buy-in of INR 5,500, 202 entries joined the tournament and the prize pool was inflated to INR 15.95 lakh.

From this field, the top 27 players were paid out a minimum of INR 15,590, with plenty of known players making the money. The top pros who cashed out early in the tournament included Sahil Agarwal (27th), Ashish Ahuja (26th), Guneet Kwatra (25th), and Neeraj Kumar (8th). Rubin Labroo aka ‘kornkid’ was the first player to end with a 6-figure pay-out, ending 5th for INR 1,06,705.

As the tournament reached its business end, Abhinav Agarwal aka ‘Brownegreanu’ and Pankaj Sharma aka ‘chalhatbe’ who were pitted against each other in the heads-up battle. Agarwal had gained the lead and the last hand took place in Level #39, with the blinds at 10,000/20,000 ante 2,500.

Here, Agarwal shoved all-in pre-flop with 6h Ac, and his opponent made the call with Kh Td. It was a brave shove from Agarwal with a relatively low kicker 6, but he was ahead and as the board rolled out 4s 2s 6d Jh 5h, he struck a pair of sixes and took down the pot, plus the massive first-place prize of INR 3,53,292. Pankaj Sharma took second place and INR 2,38,452 in cash, making a considerable bankroll addition. He has won plenty of titles on Spartan in the past, including SSS and IOPC titles.

Gutshot caught up with the winner Abhinav Agarwal after this victory. He said, “The tournament experience at Spartan has always been challenging and exciting. It’s very important to mix up your play and find good opportunities to keep building on one’s stack in the tournament. I personally believe that I was just lucky to survive, I played around 6-7% of my hands and all those hands stood out on all the streets and showdown.”

He continued, saying, “Poker for me is now more a recreation, as I happen to be working in the finance industry at Moody’s. I’ve been playing since 2011, and have been playing tournaments mostly on Spartan, as it seems to stand out from other websites for me, offering good pay-outs and an enriching gameplay experience.”

Here’s a look at the other side events at took place on SSS Day 2:

This tournament was the first SSS tournament of the day, with a field of 232 entries registering. Eventually, the top 30 places were paid out a minimum cash prize of INR 1,500 and the biggest winner of the tournament was ‘ifoldfullhouses’ who won INR 42,000 in prize money. In the final hand of the tournament, he beat ‘md007’ in heads-up, when both players hit a pair of Aces on the flop, but ifoldfullhouses won with a higher kicker, Ten. md007 walked away with INR 29,400 for finishing second.

126 entries registered to the second tournament of the day, with ‘Monish1965’ emerging as the champion, and claiming INR 50,400 in prize money. This player has been brilliant in the first couple of days of the SSS and ended Day 2 at the top of the SSS Leaderboard, where INR 5 lakh is up for grabs in additional prizes. In heads-up, he beat ‘thameemlion’ who walked away with the runner-up prize of INR 32,850.

This was the third side event of the day, building up to two high-value tournaments scheduled for later int he night. A field of 145 entries registered and from them, the top 21 places were paid out a minimum of INR 2,500 each. ‘Donkeshwar’ was the eventual winner, adding a coveted SSS title to his name, as well as INR 48,000 in cash. In heads-up, he was victorious against Punnet Dhawan, who plays under ‘Gro$peLLier’ on Spartan. This player collected INR 32,500 for finishing second.

After two major tournaments kicked off, the last SSS tournament to begin on Day 2 was this one, which had a buy-in of INR 1,100. A field of 207 entries registered and Anant Purohit aka ‘Pro’ shipped the tournament to go with the top place prize of INR 92,750. It was a good way to end the night for Purohit, who also finished Day 2 at #3 on the SSS points leaderboard. In heads-up, he beat ’18cups’ who won INR 56,875 for finishing second.