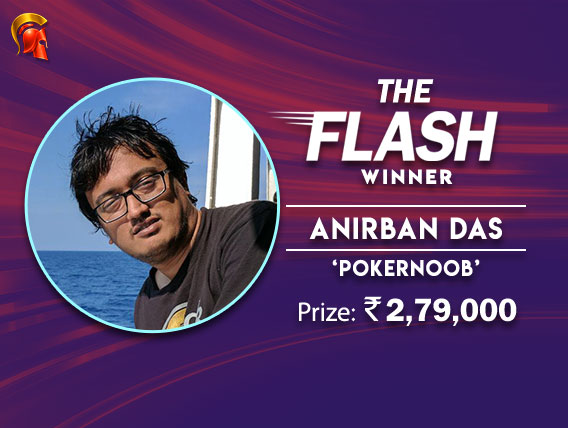 A win for Anirban Das in Spartan’s Flash


It was a terrific October for Anirban Das and he looks determined to enter the month of Diwali with some fireworks of his own. In last night’s featured tournament The Flash at The Spartan Poker, Das outlasted the field to take down the title and the lion’s share of the prizepool.

159 entries participated in this featured tournament which is part Spartan’s daily schedule of high value evening tournaments. For a buy-in of INR 4,400, players are guaranteed a prizepool of INR 12 Lakhs. 21 players made it into the money last night with min-cash being INR 13,920. ‘Exhaust’ who has had some good scores on Spartan recently was the unlucky Bubble boy who just missed out this time around. After ‘Basket’ eliminated ‘BlacKKfriday’ in 3rd place with a better two pair of Aces and Tens versus the latter’s Tens and Eights, it was time for headsup.

On the back of the previously mentioned elimination, Basket took his stack to more than 1.3 million chips and Anirban Das who plays as ‘pokernoob’ had a stack which was just a shade under 800k. Just 4 hands into headsup, those stacks flipped when pokernoob’s Jacks prevailed over the Ace Queen of Basket. From there on, there was no looking back for pokernoob and he kept the pressure on. Headsup was not a short affair by any means as both players were involved in a number of hands before the final one. pokernoob was relentless though chipping away, winning small and intermediate pots from time to time never letting his lead slip.

That meant Basket was willing to put his short stack in with even half-good holdings which is what happened in the final hand when he shoved his 432k stack with 3s Kh. Unfortunately for him, his opponent woke up with a very solid Jh Ad and snapcalled. Basket made a King pair but pokernoob’s turned set on a board of Js 6c 8c Jd Kd had already sealed the deal by then. For the win, Anirban Das made INR 2,79,000 while Basket got INR 1,79,000 for his runner-up finish.

While Das has had the kind of month that most players would kill for, this Bangalore-based player sets high standards for himself, “It was good to ship one after playing bad and running bad for the last week or so.” Although the 31 year old wasn’t quite impressed with the behaviour of some of his table mates, “Special shout out to ‘easypickins’ and ‘no4bet’. They were abusing a lot on the table and that kinda acted as extra motivation. Special message to them is to keep things civil and worry about their games instead :),” said Das cheekily as he signed off.

The weekend grind is underway with plenty of top value tournaments scheduled to take place over the next few days and GutshotMagazine.com is where you can catch all their updates!