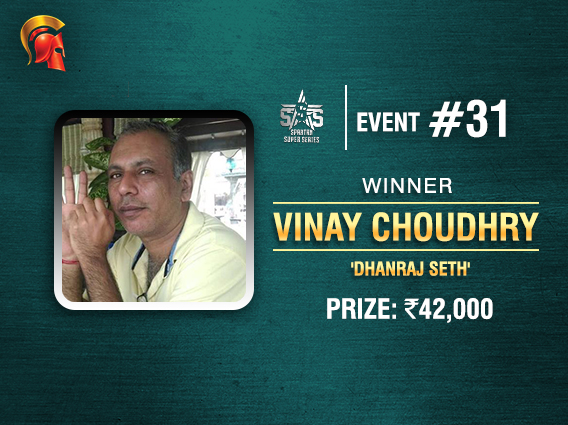 
It’s been a day of multiple title winners. We saw Abhineet Jain winning his second Spartan Super Series (SSS) tile at The Spartan Poker by claiming the DareDevil tournament and Sumit Sapra could have four SSS titles, but fell in runner-up position twice today, the first time to Jain in fact. But Vinay Choudhry continued the multiple title trend winning his third SSS title of the series by shipping Event #31 on Day 6.

This INR 2 Lakhs GTD tournament saw 228 participants and of these, only 30 places would make it to the money, the minimum of which was INR 1,500. This was a bounty format tournament where 140 from the INR 800 buy-in could be won if you knocked out your opponent, so more ways to make some extra cash in this KO event. Some of the players making the money in this tournament included Sumit ‘mrgr33n’ Sapra, Arjanveer ‘instrumental’ Chadha, Abhinav ‘Schumi91’ Iyer, M@neyM@ker and JuntaDel. However while these players cashed, they did not make it to the final table. Ashish Kaushik a.k.a ‘mmonas’ was another title winner who was looking to score his second SSS title of this series but he was unable to go the distance, still finishing an impressive 4th place (INR 16,200).

After IRA246’s elimination in 3rd place by ‘zeeke’, it was time for heads-up between him and Vinay Choudhry who plays as ‘Dhanraj Seth’. Despite scoring IRA246’s knockout, zeeke was still trailing by almost 5:1 in comparison to Dharaj Seth’s stack of over half a million chips. So it’s not surprising that the end came sooner rather than later in this battle. His stack being what it was, zeeke couldn’t afford to wait for premium hands and so when (7c Kc), he decided to take a chance at doubling up. Dhanraj Seth was behind with his Js Ts but did have a significant chip advantage to make the call. 5h 5d Ks 9c Qs gave two pair to the short stack but it was done in by the river card which gave a straight and the win to Vinay Choudhry. For his winning effort, Choudhry made INR 42,000 while zeeke make INR 29,400 for his runner-up finish.

That was it for all the Day 6 action from the Spartan Super Series at The Spartan Poker. The final day of the SSS is underway and we will bring you round ups of all the major tournaments including the SSS Main Event and the Leaderboard winner right here on GutshotMagazine.com tomorrow.