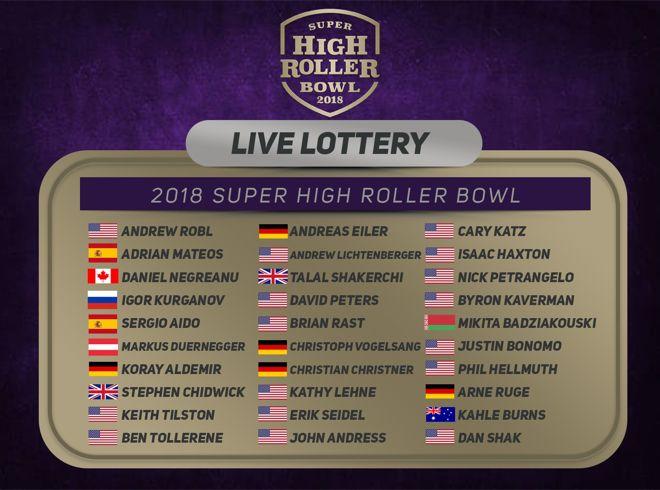 
The 2018 Super High Roller Bowl lottery was aired on PokerGO on Wednesday, 21st March and the first 30 seats have been confirmed. The $300,000 buy-in event will begin on 27th May 2018, and a total of 61 entries to the lottery were submitted, out of which only 48 seats will be handed out.

The ARIA Resort and Casino in Las Vegas has been hosting the SHRB since its inaugural event in 2015, and two previous winners in Christoph Vogelsang and Brian Rast have made the cut via the lottery system. On the other hand, 2016 SHRB winner Rainer Kempe has failed to make the cut.

Other popular players who haven’t made it to the first 30 include the likes of Dan Smith, Doug Polk, Joe McKeehen, Bryn Kenney, Jake Schindler, Stefan Schillhabel, Fedor Holz and Dietrich Fast. However, all these guys have another chance to make the cut, in a list that will be finalized by ARIA in the weeks to come.

Spain seems to be well represented at the event, with Mateos & Aido in the mix, while Germany is the second most represented country, only behind the hosts USA. Earlier this month, Justin Bonomo won the inaugural SHRB China for $4.8 million, and he will certainly fancy his chances in the 2018 SHRB.

With 30 seats already selected via this random lottery process hosted by Daniel Negreanu and Phil Hellmuth on PokerGO, 18 seats are still up for grabs. The other 31 will battle to qualify for the event through 16 seats awarded by ARIA, or through the 2 satellites available for the event.

Keep watching GutshotMagazine.com for updates on the remaining players who will make it to the event!