2021 WSOP Online Event #9: $525 Superstack Turbo Bounty concluded after an intense gameplay between top pros from across the globe. Brazilian player Lucio Lima emerged victorious after defeating some pros like three times WSOP bracelet winner Anson Tsang, Krzysztof Dulowski, Johnathon French and Joaquin Melogno among others on the final table of the event.

Lima defeated a pool of 2,229 players to clinch his first WSOP gold bracelet. The Brazilian pro, who had the third highest chip stacks when final table action kicked off, cashed a massive $91,025 in prize money. William Romaine aka ‘BigCharles’ was the first to depart from the final table. Romaine had

. However, the board of

changed the game in favour of Dulowski giving him a three of a kind lead. Romaine had to depart at the ninth spot for $16,438.

Next in line was Yngve Steen aka ‘IAMWILLIAM,’ who got busted at the seventh place. Steen’s pocket sevens lost against Stanislav Kuvaev’s pocket aces when the board opened to

Joaquin Melogno busted at the sixth place for $18,314 when his pocket jacks gave up against Lima’s queen pair. The board of

eliminated Melogno at the sixth place.

. The board opened to

, giving Dulowski a higher pair. Kuvaev busted at the fifth place for $23,741.

Johnathon French aka ‘Resolve’ was the next casualty. French’s

, when the board opened to

After busting three players on the final table, Dulowski finished at the third place. The board opened to

, since Tsang had a higher kicker. Dulowski added $60,634 to his bankroll. 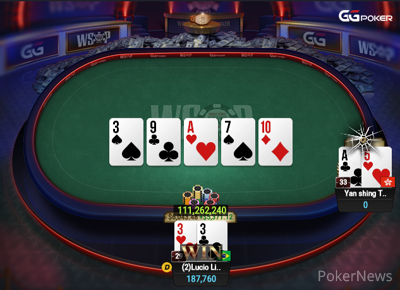 In the heads-up between Lima and Tsang, Lima had

, giving Lima his three of a kind winning hand and his first WSOP title. Tsang finished at the runner-up spot for $66,918.