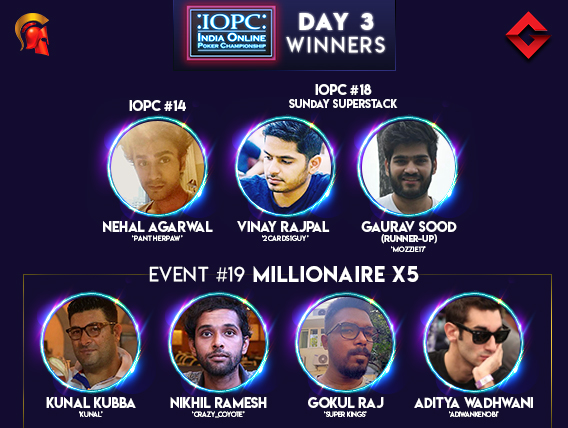 
It’s already been three-days into the country’s biggest India Online Poker Championship (IOPC) hosted by Spartan Poker which displays an enormous INR 16+ Crores GTD! Yesterday laid down 7 tournaments wrapping up Day 2 of the most awaited and thrilling Millionaire X5 that assures an incredible INR 15 Lakhs to the top 5 places! So, let’s take a quick tour of IOPC Day 3…

The first tournament of the day registered a total of 789 players for a buy-in as low as INR 550. The guarantee was also surpassed to create INR 3.94 Lakhs, well-distributed among the top 55 places who walked out with their min-cash. But the one to capture the biggest portion of the same was Nehal Agarwal aka ‘PantherPaw’ who railed out ‘deepakreddy3395’ in heads-up.

In level 46 of the tournament, Agarwal with 8h Qc up against ‘deepakreddy3395’ with Tc Qs, the flop opened 5h Jh Qh and the latter check-raised 1.1 million, putting his entire stack in middle and got a call from former. Turn 5d, ‘deepakreddy3395’ found his second pair but couldn’t dominate 8s on the river which brought Agarwal higher two pairs of QQ88 and triumphed the first tournament of the day.

The guarantee was once again passed, creating a bigger prize pool of INR 5.80 Lakhs which was shared among the top 71 places out of 968 entries for INR 660 buy-in and these players were assured a min-cash of INR 2,207. After a long haul, it was online reg ‘Amitkumar Sur’ to seize the second tournament after eliminating Sachin Raj aka ‘Hell’ in a heads-up deal.

The buy-in exceeded to become INR 1,100 in the Afternoon Hi-Fi enrolling 561 runners to grab the third title of the day. The displayed guarantee was smashed generating a higher prize pool of INR 5.61 Lakhs, a portion of which shared among the top 39 places for a min-cash of INR 3,870. Outlasting this field was ‘ingloriousbasterds’ to bag the champion’s title. He defeated ‘Dabidi_Dibide’ in heads-up to boost his poker bankroll.

In level 38, ‘ingloriousbasterds’ (Kh Ts) with 4 million chips up against ‘Dabidi_Dibide’ with 717k chips (Kd 8c) put their entire stack on the table. The former hit a flush as the board opened 4s 8s Td 6s As which remained unbeaten by ‘Dabidi_Dibide’ who showed his single pair of 88.

The most awaited January edition’s Millionaire X5 guaranteeing INR 15 Lakhs GTD to the top 5 winners concluded with Day 1C. It was the 2018 IOPC Millionaire champ Nikhil Ramesh aka ‘crazy_coyote’ to ride past a field of 753 entries and accumulate the largest stack of 3.48 million for the day. The chip leader’s closest competitor was Akash Gupta aka ‘Akash0510’ bagging 2.82 million. But the overall chip leads still belonged to Rajat Sharma aka ‘Garammasala’ the one to lead the remaining survivors to Day 2.

Sunday’s featured tournament on Spartan Poker, Sunday SuperStack displayed a huge amount of INR 40 Lakhs GTD. Generating a prize pool of INR 50 Lakhs after the guarantee was smashed, it was a great day for the top 95 finishers who collected INR 14,941 as min-cash. And ultimately, Vinay Rajpal aka ‘2cards1guy’ who took down the event after eliminating Gaurav Sood aka ‘mozzie17’ to the runner-up position after the players decided to end the tournament with a heads-up deal.

Day 2 of the Spartan’s Millionaire X5 began with much excitement. The top finishers were incredibly thrilled to walk out with their min-cashes as the guarantee was eventually crushed. The event assured the top 5 places INR 15 Lakhs and the ones to bag this incredible Millionaire title were Kunal Kubba aka ‘kunal’ (1st), Day 1 C chip leader Nikhil Ramesh aka ‘crazy_coyote’ (2nd), ‘iceiceice’ (3rd), Gokul Raj aka ‘Super Kings’ (4th) and Aditya Wadhwani aka ‘adiwankenobi’ (5th) adding a valuable feather to their poker caps. To know more about the tournament, read here.

The third day of IOPC ended with Big Daddy being the final event. Registering a massive number of 1,028 hopefuls, each of whom paid INR 1,650 as buy-in. Once again, with the creation of a prize pool of INR 15.42 Lakhs, the top 87 finishers earned quite well. The day ended with ‘lol this guy’ emerging triumphantly after dominating the tournament with his flush and Ace high, knocking out ‘realkidpoker92’ in heads-up who tossed his pair of 66. For more updates on the India Online Poker Championship and other tournaments from around the world, stay tuned to GutshotMagazine.com.