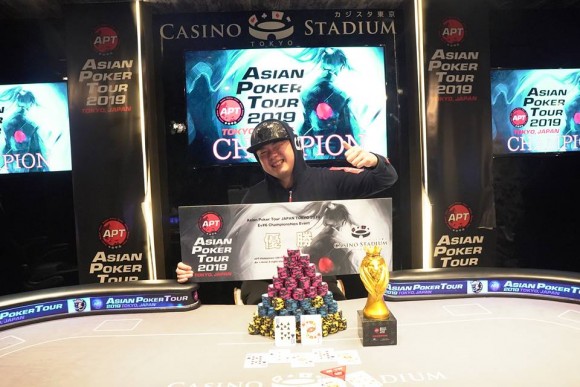 
After Asian Poker Tour (APT)’s first stop of 2019 at Vietnam, the prestigious poker tour decided to bring its shop to Japan’s capital, Tokyo for the first time in the tour’s history. Now, the inaugural APT Japan Tokyo 2019 is in the books too. The Main Event of this was won by Thailand’s Kannapong Thanarattrakul. Another marquee event in the series was the Championships Event.

This also crowned its champion and it was Japan’s very own Yuki Hirata rising to the top on the final day where a total of 24 runners were in the race. Hirata topped this field and earned himself the 1st place prize of APT Philippines I Championships ticket plus free airfare and accommodation.

He won the heads-up battle against another Japanese Hirokazu Miyoshi who bagged a ticket to the APT Philippines I 2019 Main Event and free return flights and accommodation. To round off top 3 was Kokoro Ueki, another Japanese poker player, who also won an APT Philippines I ME ticket. The last to receive a prize was 4th place finisher Perez Luis from Peru who earned a ME ticket too.

The champion Hirata has a little over $19k in live earnings but this Championships Event win will give him more opportunities to showcase his skills at the upcoming APT Philippines I, which is touted to be one of the biggest APT stops of the year.

APT Tokyo Player of the Series

Player of the Series race is included in every APT series and it takes into account the number of wins, number of deep runs made, number of tournaments played, etc. The player with the most points at the end of the series wins the POS title. 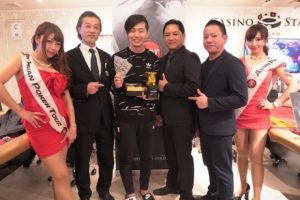 Bagging the top spot in the APT POS race was China’s Jin Bo, since he won two tournaments in the series, Event #2 NLHE 1 and Event #3 NLHE Turbo. He was awarded the APT POS trophy, ring, an exclusive watch, and $800 worth of APT tournament credits. Jin Bo won the race with 473.33 points.

Finishing 2nd in the race was Japan’s Junya Kubo with 352 points. He won the HR event and finished 2nd at the NLHE Turbo 1 where Jin Bo came 1st. Kubo was awarded the APT POS 2nd place trophy and $100 worth of APT tournament credits.

Third place went to Perez Luis who bagged 328 points at the end of the race. Luis also had multiple deep runs and finished 2nd in the NLHE Turbo 2 and 4th in the Championships Event. He has earned POS 3rd place trophy and $100 worth APT tournament credits.

A few side-event winners in the APT Tokyo 2019 were declared as well. Claiming the NLHE 2 title was Japan’s Yuta Murakami. He has now earned an APT Philippines I ME ticket plus free airfare and accommodation. Finishing 2nd, 3rd and 4th were Japan’s Hisashi Ogi and Korean pros Joo Hyun and Jang Soo Kim respectively. While 3rd and 4th place finishers pocketed a ME ticket, Ogi has free airfare and accommodation to go along with it.

NLHE 3 was won by Narutoshi Otsuka for an APT Philippines ME ticket and 4-night free hotel stay. 2nd in the NLHE 3 was Hirotsugu Ueno for the ME ticket. Filling 3rd and 4th place were Kazuhiro Ozawa and Masahiko Sugisaka respectively who have earned side-event tickets.

Keep reading GutshotMagazine.com for more such international tournament roundups as well as for general poker news from across the planet.