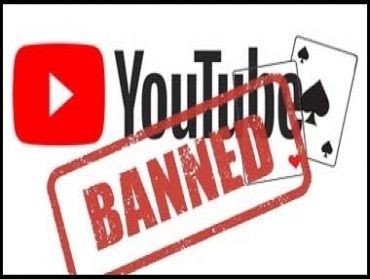 
Several poker players earn their living by creating videos on YouTube and a piece of news that flashed a couple of days ago is not new. Once again, through its censorship algorithm, YouTube is targeting poker channels. The site that automated responses, reaching out to poker channels with an explanation, failed to give reasons as to why these contents were removed.

Back in 2019, one of the biggest poker streamers on Twitch, Jaime Staples first reported about his missing videos whose more than 130 contents were removed from the channel. YouTubers believed that these videos fall under the rules that prohibit the “sale of illegal or regulated goods,” which includes alcohol, drugs, firearms, and “online gambling casinos.” poker pro Evan Jarvis was another victim from YouTube, who got two strikes on his channels but later on found 100 missing videos from his account.

Staples who has more than 73,000 subscribers on his channel took to his Twitter handle two days ago to fight back saying, “We have a big problem going on in poker YouTube right now. People are losing channels, people are getting strikes on their channels,” adding that these videos are getting taken off by YouTube.

Popular poker channels of Andrew Neeme and Brad Owen earn decently through the medium. Others like Staples, Jeff Boski also generate revenue by sharing videos on the platform. Until now, YouTube hasn’t commented on the reason for cracking down on videos and it’s gambling-related content rules still stand unclear. Neeme told, “I do know that we can’t link to online gambling sites in the description box or comments.”

YouTube drew out Brad Owen’s 5 videos from his channel of 183,000 subscribers. And you can read his tweet below:

Staples offered on Twitter to collect information from every poker player who feels they have been targeted. The former partypoker pro is fighting back and trying to help his peers. For further updates on poker industry and tournaments around the world, keep reading GutshotMagazine.com and stay tuned!

Don’t have an account on FTRPoker? Check out their review page here, and don’t miss out on their bonuses, promotions, and guarantee-smashing tournaments. Sign-up now.