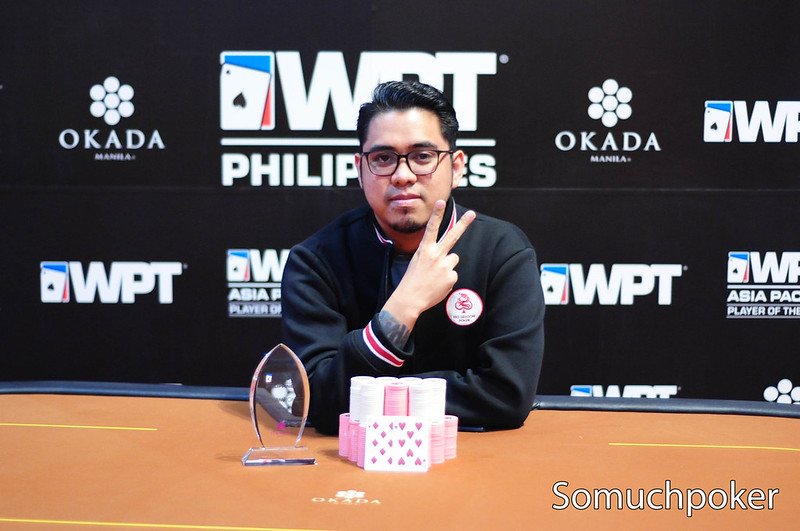 
Philippines is shining with one of the most prestigious tournament series currently underway on the casino floors of Okada Manila hosting a 12-day long World Poker Tour (WPT) series. 10 tournaments have wrapped up so far, crowning their respective titleholders. Yesterday completed the only tournament the 10k Freezeout which saw an emerging name in the Asian circuit David Erquiaga lifting the WPT trophy along with PHP 178,088 prize money!

The tenth event enrolled a total of 58 runners hunting for the first-place prize money, each of whom paid PHP 15,000 buy-in. This number eventually saw the creation of the final prize pool of PHP 495,088 that was meant to be shared among the top 8 places receiving a min-cash worth PHP 18,000.

The first casualty after the formation of the final 8 was Brett Kennedy who lost a large portion of his stack to Naoya Fujihisa, failing to dominate the latter’s straight with his JJ. Following him was Yosuke Shinjo and gradually the field crumbled down to 2-handed play, Erquiaga with 8d 8h railed out Fujihisa having Ks 9d and triumphed the tournament earning PHP 178,088 while Fujihisa headed towards the payout desk to bag PHP 105,000.

It was only last year that the champion took down APT Deepstack Turbo in Ho Chi Minh. Erquiaga also finished third in the ongoing tournament PHP 15,000 Bounty. However, he earned his career-best $51,063 in 2019 APT Vietnam Championship Event.

The festival offers 21 tournaments and the players have been awaiting the top attraction, Main Event PHP 12 million GTD that is scheduled to run from 14 to 17 February. For the latest updates on poker industry news and tournament updates, keep reading GutshotMagazine.com and stay tuned!