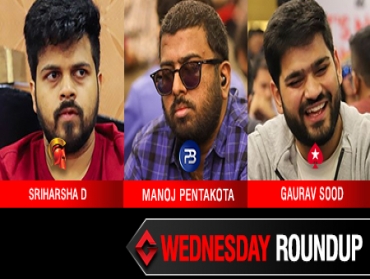 
Packed with bundles of prize money and an incredible opportunity for the poker fanatics of the country as the glorious Wednesday night was all about Goa and Las Vegas packages! Pouncing with another great news, we had incredible players shipping the daily feature but truly, the star of the night was Sriharsha D bagging his third IOPC title of the series on Spartan Poker! And here is a quick summary of Wednesday majors…

Surpassing last week’s record-breaking field, here it is, once again, Destiny 13.0 INR 30 Lakhs GTD hosted on Spartan Poker. A total of 896 runners registered themselves after each one paid INR 5,500. The advertised guarantee was crushed to generate INR 44.80 Lakhs, later distributed among the top 70 finishers. And 8+ hours of long haul we had Sriharsha D aka ‘Fish2050’, riding past the massive field, once again to bag his second IOPC title! The champion is undoubtedly one of the prominent faces in the poker scenario right now after already finishing second in the 2020 BPT Kicked Off event. And last night he pushed away Abhishek Jaiswal aka ‘allout1’ in the runner-up position after striking a heads-up deal, further boosting his poker bankroll. And that’s not enough, the champion bagged his third title, ending the IOPC Day 6 by triumphing Daily Hi-Fi!

Dominating a field of 478 entries on PokerBaazi’s G.O.A. INR 20 Lakhs GTD was the first Spartan Millionaire Manoj Pentakota aka ‘killbill’. The tournament had a fixed buy-in and each player enrolled after paying INR 5,500 which eventually saw the creation of a higher prize pool of INR 23.90 Lakhs. Pentakota defeated Shashank Desai aka ‘indianrat’ in heads-up and took home INR 4.32 Lakhs as winner’s prize money. The runner-up also ended up earning INR 3.13 Lakhs.

PokerStars flagship tournament Night on Stars INR 5 Lakhs GTD pulled out 243 players who registered themselves for a buy-in of INR 2,200. The tournament continued for over 6 hours and circuit grinder Gaurav Sood aka ‘3betPanda’ triumphed Wednesday night to bag INR 96,466 in prize money after eliminating Rohit Mishra aka ‘PillowFight22’ in heads-up who managed to secure INR 71,300

Other notable players finishing in the money include Prashanth Sekar aka ‘nemesis9961’ (12th), Faiz Alam aka ‘LFGgggg’ (14th), Rajat Sharma aka ‘sharabikebabi’ (19th), Sahil Mahboobani aka ‘inaboobham’ (33rd) and so on. For the latest updates on live and online poker tournaments keep reading GutshotMagazine.com and stay tuned!