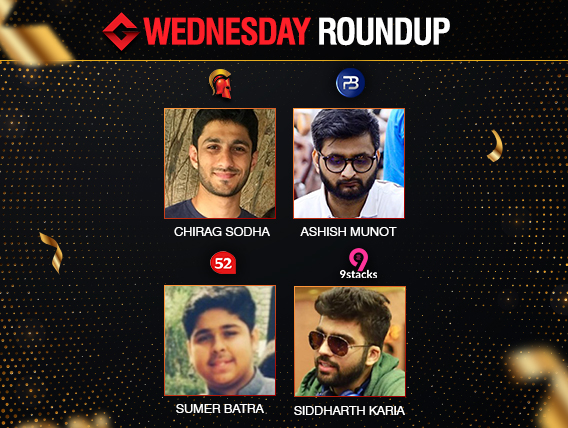 
The major online sites are blazing fire once again. It was only last week that PokerBaazi concluded PokerBaazi Premier League (PPL) and here it is once again with PokerBaazi Monthly Value Series (PMVS) from 11 to 15 March. On the other hand, AOPS and UFC KO are also underway on Adda52 and PokerStars respectively. And here is a complete summary of Wednesday majors….

On Sunday, the well-known circuit grinder, Chirag Sodha aka ‘chilling’ took down Millionaire Lite which guaranteed INR 10 Lakhs to the winner. And once again, Sodha rode past the field to grab the Destiny INR 30 Lakhs GTD title last night on Spartan Poker reserving a seat for himself in the Destiny SnG Finale. A total of 591 runners joined the field after paying INR 5,500 out of which the top 50 places locked a min-cash. Sodha defeated Bharat Kumar aka ‘bharat29’ in heads-up who eventually settled in the runner-up position.

Spartan Poker’s Mega Freeze INR 4 Lakhs GTD commenced at 9:30 pm last night attracting a total of 149 entrants who paid INR 3,300. This number was enough to cross the guarantee and create INR 4.47 Lakhs in prize pool. Coming out on top was ‘Langer’ who defeated ‘rejamkid’ in heads-up to bag the valuable title.

The popular Wednesday marquee on PokerBaazi, The Pride INR 10 Lakhs GTD was a part of the ongoing PMVS series. Yesterday recorded a total of 405 entrants who paid INR 3,300 which ultimately saw the guarantee being slightly surpassed to create INR 12.15 Lakhs in prize pool. Outlasting the field was the 2019 WPT India Main Event champ Ashish Munot aka ‘OMG_spew’ who defeated ‘Psycorp’ in heads-up for INR 2.55 Lakhs in prize money while his opponent took home INR 1.78 Lakhs for settling in the runner-up position.

At 9 pm last night, PokerBaazi hosted PMVS #3 INR 7 Lakhs GTD which gathered a total of 260 entrants after each one paid INR 2,750 as buy-in. Powering through the field was Ritwik Khanna aka ‘ritwikkhanna’ who eliminated Utsav Taneja aka ‘ranny006’ in heads-up. Khanna pocketed INR 1.64 Lakhs in prize money while Taneja secured INR 1.15 Lakhs for the runner-up position.

With a buy-in of INR 2,500, a total of 684 runners registered to the field in AOPS Maverick INR 15 Lakhs GTD. This flagship tournament of Adda52 crossed the displayed guarantee to collect INR 15.56 Lakhs in prize pool which belonged to the top 72 finishers. It was online grinder Sumer Batra aka ‘dickhead123’ who conquered the field and seized INR 2.58 Lakhs in prize money while ‘allinbluff’ settled in the second position securing INR 2.41 Lakhs.

PokerStars’ Wednesday flagship tournament Night on Stars INR 10 Lakhs GTD was a part of the UFC KO Series. Last night a total of 389 entrants pounced on the field to hunt for the first-place prize money. The tournament ended with a three-way deal that saw Vikram Mishra aka ‘GreenSTUFF79’ securing INR 67,864 for topping the list while ‘Narcos251’ settled with INR 75,940 in the second position and ‘iveynotivy’ in the third place with INR 67,634.

9stacks’ (Signup Code ‘GUTSHOT’) Wednesday headlining tournament, StackUp Turbo INR 1 Lakh GTD attracted a total of 99 entrants after each paid INR 1,100 buy-in. Topping the list was circuit reg Siddharth Karia aka ‘Schemer77’ who defeated ‘DiscoDancer’ in heads-up to bag INR 27,000 in prize money while his opponent settled for INR 19,000 in the second position.