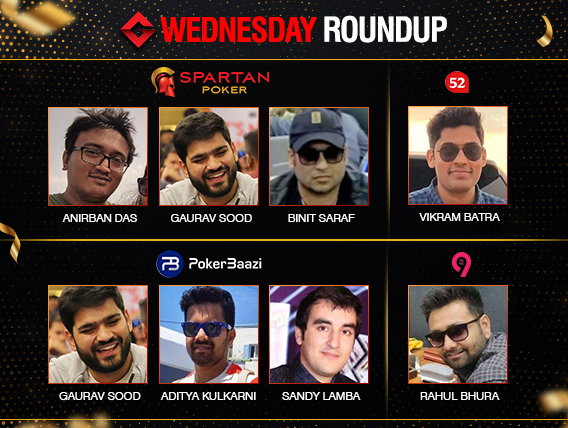 
One can notice the guarantees gradually increasing as we hit the mid-week mark. There was a dearth of events last night and of course, PokerBaazi’s PokerBaazi Premier League (PPL) attracted great many enthusiasts. Spartan Poker put down three feature tournaments and Destiny 13.0 was among the popular ones. Adda52’s Maverick assured INR 10 Lakhs while PokerStars’ Night on Stars displayed INR 5 Lakhs GTD. And here is a summary of Wednesday Majors…

Spartan Poker’s Wednesday marquee event Destiny 13.0 INR 30 Lakhs GTD pulled out 691 runners who paid INR 5,500 each and this led to an overall creation of INR 34.55 Lakhs in prize pool. Coming out on top was well-known circuit grinder Anirban Das aka ‘pokernoob’ who defeated ‘Ponkey’ in heads-up eventually settling in the runner-up position.

A prominent name in the industry, Gaurav Sood aka ‘mozzie17’ rode past the field to take down Dominator INR 6 Lakhs GTD on Spartan Poker. A total of 314 entrants registered themselves out of which only the top 27 ended in the money. Sood defeated ‘Speedpost09’ in heads-up to bag the first-place prize money.

PokerBaazi Premier League (PPL) is currently underway on PokerBaazi and yesterday at 5:30 pm hosted PPL #33 SuperStack INR 5 Lakhs GTD. Truly, fate was in favour of Gaurav Sood aka ‘gaug17’ who captured his second title of the day after conquering a field of 399 eliminating ‘Manojk786’ in heads-up to bag INR 1.05 Lakhs in prize money.

A total of 308 entrants joined the field after chipping in 11,000 in PPL #34 PLO HighRoller INR 30 Lakhs GTD on PokerBaazi. After 8+ hours of intense grinding session, it was online crusher Aditya Kulkarni aka ‘adit11’ to claim the title. Kulkarni defeated ‘monster’ in heads-up to ship the entire tournament for a hefty INR 6.80 Lakhs. However, his opponent earned INR 4.77 Lakhs for resting in the runner-up position.

Wednesday feature The Pride INR 40 Lakhs GTD was part of the PPL on PokerBaazi. The event commenced at 8 pm attracting 959 entrants for a buy-in of INR 5,500. Eventually, this number crushed the advertised guarantee creating INR 47.95 Lakhs in prize pool and the top 117 finishers took home a slice from the same. Powering through this massive field was Sandy Lamba aka ‘Ziigmund’ who defeated Dinesh Singh aka ‘Daddu26’ in heads-up for an impressive INR 8.25 Lakhs in prize money.

Wednesday flagship tourney on Adda52 is Maverick INR 10 Lakhs GTD and last night fetched 532 runners out of which only 55 locked a min-cash. It was Vikram Ved Batra aka ‘swingtrader’ to clinch to the winner’s prize money of INR 2.90 Lakhs after railing out Sriharsha D aka ‘Ivey2’ in heads-up.

9stacks hosted StackUp Turbo INR 1 Lakh GTD last night at 8 pm. A total of 108 runners pounced on the field slightly surpassing the guarantee and the largest chunk of the same was taken away by Rahul Bhura aka ‘chanakyax’ who beat ‘SANShISh’ in heads-up for INR 29,160 in prize money.