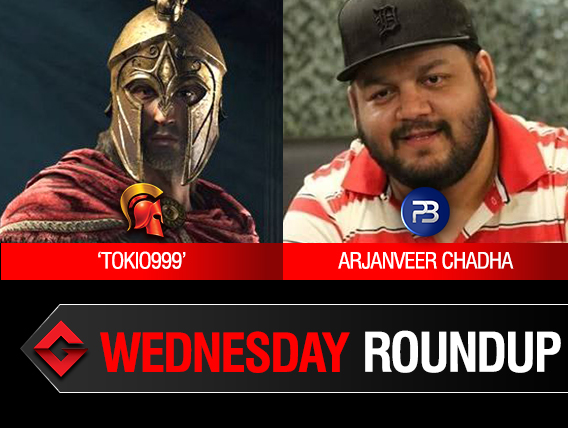 
The mid-week loomed with a crazy bundle of surprises. The poker aficionados are well-aware by now that Wednesday is all about travel packages and incredible guarantees. One of the most popular online tournaments on Spartan Poker is Destiny which lays down an incredible opportunity for players to shape their destiny and not to forget the amazing prize at the SnG Finale i.e. a travel package worth INR 10 Lakhs to the poker capital, Las Vegas! In addition to this, PokerBaazi also hosts G.O.A that assures all expenses for a trip to Goa. Having laid some of the brilliant opportunities, let’s take a quick tour of Wednesday majors…

Following the steps of Destiny 12.0 SnG Finale winner Amarjeet Singh aka ‘superchor89’ was the ‘Tokio999’ who booked his seat to the newest Destiny 13.0 SnG Finale where the winner will meet the rest 9 players and the top 3 will grab tickets to Vegas! The 13th edition of Destiny kicked off yesterday to continue till 18th March 2020, scheduled on each Wednesday.

Spartan Poker’s headlining tournament promised INR 20 Lakhs GTD, attracting a total of 455 players for a fixed buy-in of INR 5,500. Eventually, the guarantee was smashed generating a higher prize pool of INR 22.75 Lakhs which was distributed to the top players before the winner was announced. Few hours into the tournament saw ‘Tokio999’ who wished to stay anonymous, grabbing the first-place prize money after defeating ‘Piko’ in heads-up.

PokerBaazi’s flagship tournament G.O.A. INR 20 Lakhs GTD had a fixed buy-in of INR 5,500 which dragged 395 players in total. The displayed guarantee was also shared, and the top 54 places walked away with a minimum cash. After few intense hours of grinding, the star of the night was a prominent figure in the circuit Arjanveer Chadha aka ‘holdbaby’ who triumphed Wednesday night to grab INR 3.7 Lakhs in prize money after defeating ‘Apocalypto’ in heads-up who managed to secure INR 2.67 Lakhs for the runner-up position.

INR 2,500 was the buy-in to Adda52’s featured tournament Maverick INR 10 Lakhs GTD. Pulling out 478 players in total, the guarantee was passed, creating a higher prize pool which was shared among the top 49 places. Eventually, after few hours of the grinding session, claiming the lion’s share of the same ‘Aarchit’ who grabbed the winner’s prize money of INR 2.26 Lakhs after defeating Danish Shaikh aka ‘King0fMerge’ in heads-up. The runner-up managed to walk out by securing INR 1.98 Lakh.

Other notable players finishing in the money include Raman Gujral aka ‘thuscame’ (4th), Chetraj Mishra aka ‘chetraj1000’ (6th), Pranjal Gandhi aka ‘lilmessipranjal’ (8th), Naren Purohit aka ‘IMUNAGI’ (35th), Shagun Jain aka ‘sogani94’ (43rd) and others.

Tuesday night’s Sixth Sense winner ‘tks5432’ once again pounced through the field to grab his second title on PokerStars’ Night on Stars INR 5 Lakhs GTD title. Luring a total number of 203 entries for a buy-in of INR 2,200. However, the tournament ended with a heads-up deal and that’s when ‘tks5432’ was announced as the official winner pocketing INR 83,168, pushing away ‘kipokerNJ9’ to the runner-up position for INR 71,326.