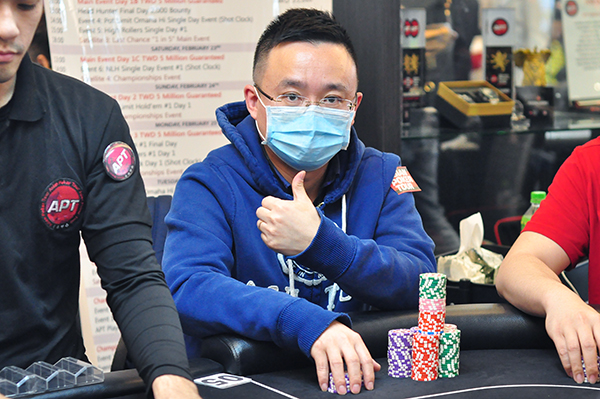 
Asian Poker Tour (APT) is currently in Taiwan for the first time, beginning its 2019 APT Taiwan series on 20th February. The series is expected to be in the books by 3rd March 2019 and already, the TWD 33k Main Event declared its champion to be Chow Cliff.

The highlight of any APT after the ME always is the TWD 49.5k Championships Event and after Day 1A’s conclusion a couple days ago, yesterday the event saw its second and last starting flight in the books. Day 1B began with 113 runners playing for 8 levels. At the end of the day, this field whittled down to 67 players and leading them all in chip counts was China’s Wang Yan Feng with 252,600 chips bagged up.

Trailing Feng was Hong Kong’s Chung Kin Fai ‘Keanu’ at 2nd place in chip counts with 214,900 chips, having already made a cash in the series for finishing 18th in the Main Event. Feng’s lead is less than Day 1A chip leader Mark Reyes who had bagged 358,200 chips at the end of the day and also won the first Short Deck event of this series a few days ago.

The chip leader Feng has around $27k in live cashes. He has cashed in live tournaments since 2016 but made his best live cash of $8,174 in 2018 Tiger Poker Cup 2018 Season 3 in Beijing. He mostly plays in the region, and a relatively lesser known player like Feng would add a great amount to his bankroll if he wins the APT Taiwan Championships Event.

Day 1B saw a lot of renowned players taking part. Some of them were past APT title winner like Jinwoo Kim, SJ Kim, Hung Sheng Lin. Others in the mix included UK’s Alex Lindop and Thailand’s Phachara Wongwichit. All the above names have progressed to Day 2, which is to begin today, 1st March.

Day 1B’s 67 progressors will join 1A’s 61 and the total 128 players will play today, starting at 1 pm local time at the CTP Club, Taipei, Taiwan. Average stack is 91,797 and total chips in play are 11,750,000. Keep reading GutshotMagazine.com for upcoming APT Taiwan updates and for general poker news from around the world.