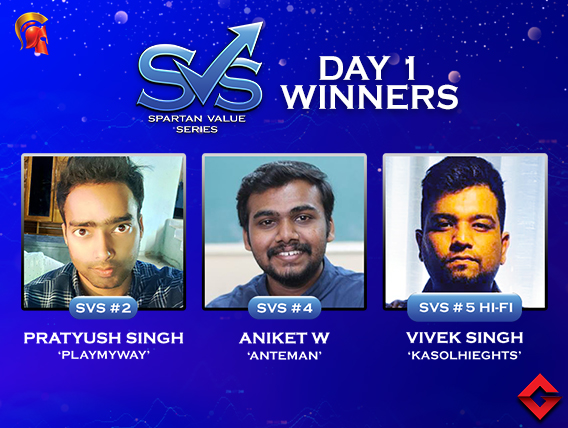 
We are well-aware that Spartan Poker comes up with incredible tournament offerings for its loyal users quite frequently and one of them is Spartan Value Series (SVS) hosted each month especially designed for low/mid-stakes players and this time the series offers INR 50+ Lakhs GTD. The 5-day long series scatters 24 tournaments that hit the website yesterday. The biggest event took place at 10 pm last night promising INR 6 Lakhs GTD. And here is a complete summary of SVS Day 1…

The opening tournament of the day had 474 entries who paid INR 110 each to join the tournament. Recording a pretty good field and crossing the guarantee to create INR 47,400 in prize pool, the event was well-received by the top 31 places securing a minimum amount of at least INR 417. The tournament that began at 1 pm ended in level 55 when ‘8888’ defeated ‘Kaptan786’ in heads-up with his higher two pair of 8822 against his opponent’s 3322 and claimed the winner’s prize money of INR 10,025.

At 3 pm, Spartan Poker hosted the second SVS tournament fetching 324 entries for INR 220 buy-in. Here as well, the assured amount was surpassed to become INR 64,800 in prize pool and the money reached the top 27 places ensuring INR 648 as min-cash. After spending long hours in the battle, it was Pratyush Singh aka ‘PlayMyWay’ who topped the tournament and took home INR 13,388 as the first-place prize money after the players settled for a 3-way deal which saw ‘Mhrptl’ in the second position for INR 10,652 followed by ‘illuminati.AM’ finishing third.

The buy-in came down to INR 165 in the third tournament of the day garnering a pretty decent field of 261 runners generating INR 39,150 in prize money. The top 20 places strolled out with a piece of the same. Capturing the first-place prize money was ‘Radhe2015’ after the players struck a three-way deal that saw ‘howbizzare’ in the second place and the winner of SVS #2 (read above) Pratyush Singh aka ‘PlayMyWay’ in the third position.

Online reg and a prominent name in the industry Aniket W conquered the fourth event of the SVS Day 1 on Spartan Poker to top the list after settling for a heads-up deal which saw ‘DONKAKING’ in the runner-up position. The entire tournament pulled out 276 runners. The buy-in also increased to become INR 880 which was enough to drive past the displayed guarantee which eventually became INR 2.20 Lakhs that reached the top 27 places who locked in an INR 2,208 min-cash.

The first day of SVS ended with Hi-Fi INR 6 Lakhs GTD. The buy-in jumped to become 1,650 and a total of 478 entrants pounced on the field to generate a final prize pool INR 7.17 Lakhs. The top 45 finishers earned a slice from the same, but it was circuit grinder Vivek Singh aka ‘KasolHieghts’ who took home the largest portion after railing out Anuj Laddhad aka ‘Anuj16101’ in heads-up.

By the time the tournament reached Level 44, Singh (6♦ Q♦) had accumulated 2.9 million in chips and was up against Laddhad (4♠ J♦) with 671k chips in the final hand. Singh flopped a flush on the 4♦ 5♦ A♦ board and put 44k bet while Laddad shoved hoping for a flush. But 8♦ 6♥ on turn and river, respectively saw Singh flipping over his higher flush to take away the limelight and Laddhad settled in the second position.