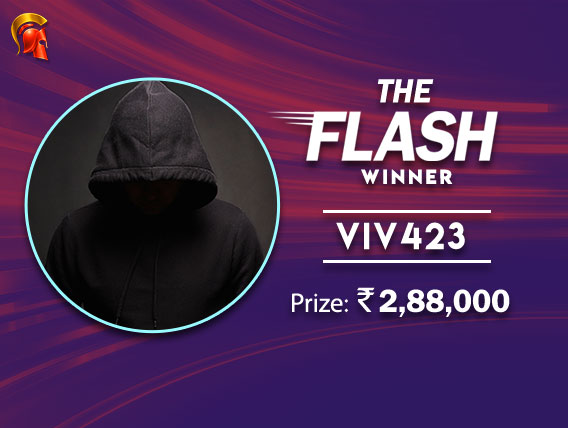 ‘viv423’ emerges victorious in The Flash on Spartan


Featured tournaments on websites like The Spartan Poker in India are poker players’ bread and butter, with several lakhs of rupees on offer each night. On Spartan, The Flash INR 12 lakh GTD takes place every Thursday night and this tournament generally attracts some very good players from around the country.

Last night too, a field of 219 entries registered to the tournament which kicked off at 7:30pm and plenty of known pros finished among the top 20 who got paid out a minimum cash prize of 16,080. The first to be paid was ‘HouseMD’ who recently also won the Big Daddy Goa trip on Spartan.

Apratim Sharma aka ‘checm@te’ was another known player to finish in the money, busting in 8th place for INR 37,200, having also won The Flash three weeks back on Spartan. ‘MaalChaHee’ finished in 4th place to become the first player of the night to get a 6-figure score, a player who also recently won the SSS Flash (Lite) earlier this month.

The competition got more intense after that, where ‘viv423’ found himself in heads-up against Kartik Ved aka ‘TheInternetKid’. Ved is an accomplished player who also runs his own stable called ‘AceJack’, so it was always going to be tough to get past him, but viv423 managed it last night.