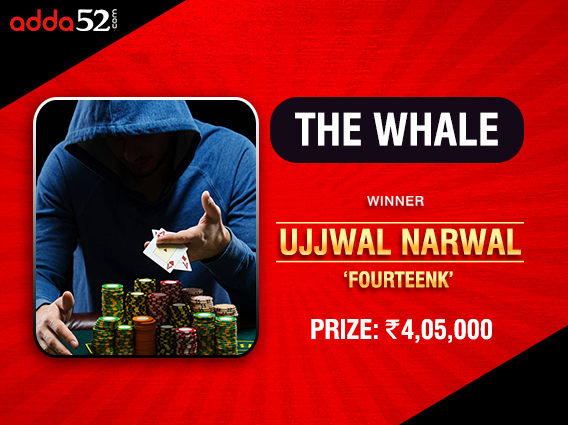 
Friday evening sees a string of top value tournaments take place across many of the top Indian poker sites and it is no different at Adda52.com. Kicking off at 8:00 pm every Friday is their featured tournament called The Whale which promises players a guaranteed prizepool of INR 15 Lakhs and last night the player who took away the biggest chunk of that prizepool was 21 year old Ujjwal Narwal who plays as ‘fourteenk’ on the Adda52 platform.

128 players came together to participate in this tournament and there were 70 re-entries done by player in this INR 7,500 buy-in tournament. It is very popular with many of the regs because the structure is very deep as players begin with a starting stack of 25,000 chips. 18 players were paid out with min-cash being double the tournament buy-in.

The juice is of course in the top three and the first of these payout positions went to ‘sweatmyass13’ who scored INR 1,91,250 for his 3rd place finish. Headsup battle took place between ‘fourteenk’ and ‘kvohra’. Gutshot was able to speak with the winner and he walked us through the hand which went like this, “With pocket Deuces, I raised it up which my opponent called. On a flop of 6x 2x 4x, he donked 2 bb. I reraised him and he shoved with A5.” Needless to say, Narwal snapcalled with his set and claimed all the chips in the tournament. His win netted him a payday of INR 4,05,000 while kvohra took home INR 2,55,000 for the runner-up finish. “I love the structure of Whale. I was fortunate enough to build a massive stack when it was down to the final two tables and later hold that chiplead which eventually led to winning the tournament”, said the Noida-based player who is doing his Engineering from IIT Delhi.