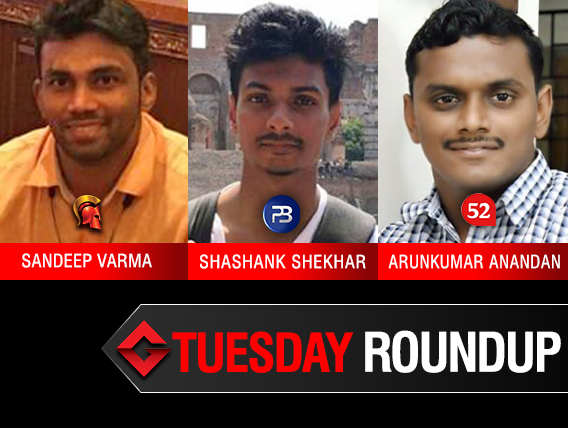 
Two days into the week, the Tuesday flagship events assured relatively higher guarantee in comparison to the sluggish Monday night. The action picked up the pace as Spartan Poker’s advertised guarantee was crushed followed by another high-value tournament, The Endeavour on PokerBaazi that knocked with INR 15 Lakhs GTD luring a pretty good number of players and Adda52 featured INR 7.5 Lakhs in Hitman! So, let’s take a quick tour on Tuesday majors…

Spartan Poker’s flagship tournament Mega Stack promised INR 15 Lakhs and attracted a total of 553 entries with each one chipping in a buy-in of INR 3,300. Eventually, the guarantee was crushed, creating a higher prize pool of INR 16.59 and this amount was shared among the top 55 places, who walked out with their min-cash. However, the tournament ended with a heads-up deal and that’s when Sandeep Varma was declared the official titleholder, pushing away Akash Gupta aka ‘Akash0510’ to the runner-up position. Varma, who is an online reg and a prominent face in the circuit added another major title to his poker career.

Tuesday saw another high guarantee tournament, The Endeavour INR 15 Lakhs GTD on PokerBaazi which had a fixed buy-in of INR 3,850. The top 45 places benefited from the prize pool out of 366 entrants. But the one to carrying a hefty INR 3.15 Lakhs in prize money was circuit grinder Shashank Shekhar aka ‘Iverson003’ who defeated ‘bholukaka’ in heads-up. The runner-up managed to walk out of the tournament with INR 2.20 Lakhs.

A total of 234 players entered the Tuesday flagship tournament on Adda52, Hitman INR 7.5 Lakhs GTD. This was a bounty tournament that ensured the top players to stroll out with additional cash prizes. But the player to collect 14 bounties on his way was Arunkumar Anandan aka ‘arunk5875’. Anandan railed out ‘qwerty3293’ in heads-up to seize the first-place prize money of INR 2 Lakhs. However, the second-place finisher added INR 1.20 Lakhs in his poker bankroll.

The top players who received a paycheck include Aditya Kumar aka ‘adikumar2010’ (4th), Bhavye Mittal aka ‘luckysinghh’ (8th), Akshat Dwivedi aka ‘viking1111’ (11th), Naren Purohit aka ‘IMUNAGI’ (16th) and others.

Registering a bunch of 222 players after each one paying INR 2,750 buy-in in the PokerStar’s Tuesday major, Sixth Sense INR 6 Lakhs GTD. With the eventual creation of the prize pool, the top 41 places profited, walking out with their min-cash. However, the one to grab the lion’s share of the same was an anonymous player ‘tks5432’ who defeated Prashanth Sekar aka ‘nemesis9961’ in heads-up for INR 1.10 Lakhs prize money. Sekar finished in the runner-up position securing INR 80,194.