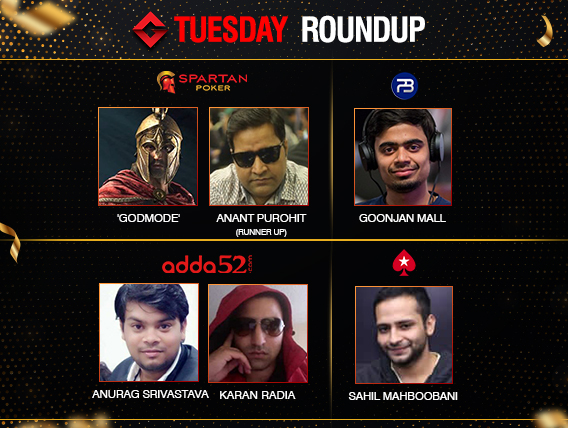 
There was no lack in action on the virtual felts last night as government announced another 21-days lockdown. With players quarantining themselves meaning that most of the marquee events will cross their advertised guarantee which was also the scenario yesterday. Spartan Poker came with the biggest guarantee tournament, the Tuesday popular Mega Stack INR 20 Lakhs GTD, on PokerBaazi The Endeavour promised INR 15 Lakhs, Hitman and Sixth Sense on Adda52 and PokerStars assured INR 10 Lakhs GTD respectively. And here is a complete summary of Tuesday majors…

Spartan Poker’s Tuesday headliner event Mega Stack INR 20 Lakhs GTD attracted a massive field of 988 entries after each chipped in INR 3,300. Smashing the advertised guarantee to create INR 29.64 Lakhs in prize pool which was eventually was shared among the top 87 finishers. Topping the list was ‘GodMode’ who clinched to the winner’s title while circuit reg Anant Purohit aka ‘Pro’ ended up earning the second place payout.

INR 1,650 was the buy-in paid by 776 entrants, individually to enter The Race INR 7.5 Lakhs GTD on Spartan Poker. The tournament kicked off at 9:30 pm and gradually into the competition a bigger prize pool of INR 11.64 Lakhs was collected to be profited by the top 63 players. At 5:12 am, ‘Hiteshh’ came out on top defeating Abhishek Jain aka ‘PirateMihawk’ in heads-up to grab the winner’s cash prize.

Riding past a field of 617 entries was a well-known online grinder Goonjan Mall aka ‘gmtesting’ who beat Shardul Parthasarathi aka ‘duuurrr’ in heads-up to capture the first-place prize money of INR 4 Lakhs in The Endeavour INR 15 Lakhs GTD on PokerBaazi. The competitors paid a buy-in of INR 3,850 which led the guarantee surpass to generate a higher prize pool of INR 21.59 Lakhs. As the tournament came to a standstill, Parasarathi walked out with INR 2.86 Lakhs.

Adda52 hosted Hitman INR 7.5 Lakhs GTD, a bounty tournament that means additional cash prizes! This Tuesday feature caught the attention of 424 entries, each of whom paid buy-in of INR 4,500. Capturing the first-place prize money was India’s biggest online winner Anurag Srivastava aka ‘NormanBates’ who defeated ‘maroonfive’ in heads-up secure INR 3.36 Lakhs in prize money along with 9 bounties on his way. It was on Monday that Srivatasva ended in the second position in Spartan ReCharge.

Adda52 hosted another tournament last night at 10 pm, Hexagram INR 2.5 Lakhs GTD. A total of 221 entries chipped in INR 2,200 to join the field which eventually led to the creation of bigger prize pool of INR 4.42 Lakhs. The top 24 finishers earned a share from the same but the one to capture the largest chunk was Karan Radia aka ‘Reg_Slayer’ who defeated ‘P80153’ in heads-up for INR 1.20 Lakhs in prize money while his opponent ended up earning INR 70,720.

PokerStars’ flagship tournament Sixth Sense INR 10 Lakhs GTD saw 396 entries for a buy-in of INR 3,300. Before the tournament came to a standstill, the top 71 places strolled out with a min-cash, a share from the prize pool. After hours of intense grinding session, it was a prominent name in the industry, Sahil Mahboobani aka ‘inaboobham’ who was announced the official titleholder after a heads-up deal with Prabhat Paliya aka ‘uchichaa19’. Mahboobani earned INR 1.79 Lakhs whereas his opponent ended up with INR 1.71 Lakhs.