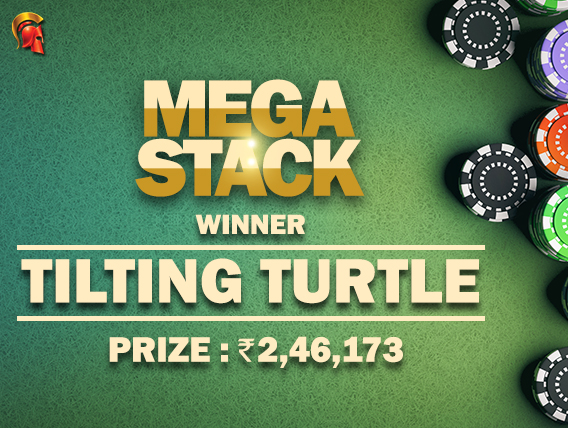 
It was a good outing at the virtual tables of The Spartan Poker on Tuesday night for ’tilting turtle’ as he claimed the top spot in the Mega Stack tournament. For his winning effort, tilting turtle won a sum of INR 2,46,173 after a three-handed deal took place among the final three.

The INR 12 Lakhs guarantee on this event was surpassed comfortably when 467 entries ponied up the INR 3,300 buy-in for this tournament yesterday evening. A total prizepool of INR 14,01,000 was in play as a result which would be split between the top 39 finishers. Everyone who made it into the money was assured a payday of minimum INR 9,666.

Let’s take a look at a couple of the big hands that went down in this Mega Stack. While the tournament continued three-handed for a while before the deal was struck, the last player elimination happened earlier in Level #48 with blinds running at 35,000-70,000-8,750. ‘9high’ (934k chips), ‘Nomercy3801’ (3.4 million), tilting turtle (2.8 million) and ‘Dreamfreeze’ (2.1million) remained in the field. Dreamfreeze with 4s Ah raised it to 140,000 and soon faced the all-in of the shortstack 9high who held Qd Kc. While Dreamfreeze may have considered a call, that thought was laid to rest when Nomercy3801 called with pocket Jacks (Jd Jc). Hopes were immediately dashed for 9high when the board of Jh 6c 7h 7c 5s gave Nomercy3801 a fullhouse of Jacks full of Sevens which eliminated the short stack in 4th place. Nomercy3801 moved into a solid lead at this point.

It was coming around to just about 2 am when these three players played their final hand which was again won by tilting turtle after which the players agreed upon a deal. Basis ICM, tilting turtle took the win and INR 2.46 Lakhs while Dreamfreeze took 2nd place for INR 1.91 Lakhs and INR 1.66 Lakhs went the way of second runner-up Nomercy3801.

Get your daily dose of poker right here at GutshotMagazine.com!