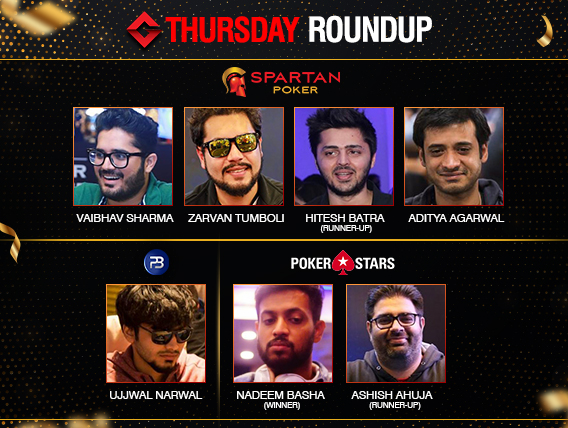 
A thundering Thursday night packed with incredible offers for the poker fanatics of the country. As we all know, PokerBaazi Premier League (PPL) is currently underway and yesterday hosted HighRoller INR 50 Lakhs GTD whose final table will be played live in Goa on 13 March. Apart from that, other marquee tournaments that caught the public attention was Triple features on Spartan Poker and PokerStars’ Highroller INR 15 Lakhs GTD. And here is a complete summary of Thursday majors…

Thursday popular on Spartan Poker is Ultron INR 20 Lakhs GTD. The tournament commenced last night at 8 pm registering a total of 562 entrants enough to cross the advertised guarantee to create INR 22.48 Lakhs in prize pool. Coming out on top was Zarvan Tumboli aka ‘BolAuntyAuKya’ who took home the largest chunk from the same after the players settled for a heads-up deal which saw Hitesh Batra aka ‘hitesh bhai’ in the runner-up position.

One of the prominent names in the industry, Aditya Agarwal rode past the field of 274 runners to secure the Dominator INR 6 Lakhs GTD title on Spartan Poker last night. Agarwal, playing under the username ‘Yennefer’ defeated ‘Gangnamstyle’ in heads-up with his trip sevens over his opponent’s two pairs of Aces and Sevens to add another title to his illustrious poker cap.

At 9:30 pm yesterday, Big Bounty INR 6 Lakhs GTD kicked off on Spartan Poker attracting a total of 310 runners paying INR 3,300 buy-in. The top 31 finishers locked up at least the min-cash, a share from the final prize pool. Outlasting the field was Vaibhav Sharma aka ‘Nikka Zaildar’ who defeated ‘suman314’ in heads-up and added another win to his poker CV.

PokerStars’ Thursday marquee Highroller INR 15 Lakhs GTD had a fixed buy-in of INR 7,700, attracting a total of 209 runners. After several hours of grinding session, the tournament ended with the players settling for a heads-up deal which saw Nadeem Basha claiming the title and Ashish Ahuja settling in the runner-up position. Both players profited INR 2.55 Lakhs.