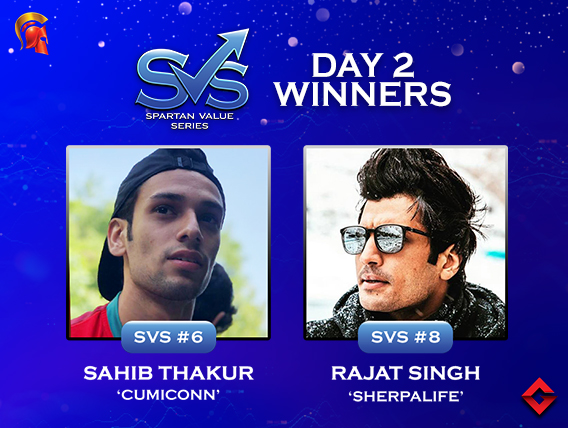 Thakur and Singh among winners on SVS Day 2


The Spartan Value Series (SVS) is running its February edition on Spartan Poker and undoubtedly, the start has been fabulous. Spreading out 24 events, the entire series guarantees INR 50+ Lakhs, especially attracting the low/mid-stakes players. Thursday lined up another 5 tournaments from 1 pm onwards and all 5 advertised guarantees were smashed! Here is a complete summary of SVS Day 2…

The buy-ins won’t get lower than INR 110 which was paid by 428 entrants hunting to grab the first title of SVS Day 2. This number easily crossed the assured amount generating INR 42,800 in prize pool. Out of the 400+ entries, the top 27 finishers strolled out securing a share from the same. It was Sahib Thakur aka ‘cumiconn’ who topped the list after the players settled for a heads-up deal which saw ‘gabbarsingh’ in the second position.

At 3 pm, the second tournament displayed INR 330 buy-in and eventually 195 players pounced on the field smashing the guarantee and creating INR 58,500 in prize pool. It was ‘Rohityad’ to come out on top after the players struck a 4-way deal and earned INR 10,525 in prize money. While ‘Ecasanova’ settled in the second place for INR 9,841.

The guarantee and buy-in went down the ladder to become INR 25K and INR 165, respectively. The third tournament captured the attention of 247 runners out of which only 15 top finishers were ensured a portion from the prize pool of INR 37,050. Seizing the first-place prize money was Rajat Singh aka ‘sherpalife’ who added a feather to his poker cap. The tournament reached level 28 and that’s when Singh dominated ‘Borish brejcha’ in heads-up with his flush, eliminating his opponent in the runner-up position.

Once again, the tournament generated a bigger prize pool of INR 1.40 Lakhs after 200 entrants joined the field paying INR 770, individually. Hours of grinding saw ‘Junior-KK’ topping the list after the players decided to settle for a 4-way deal. With ‘Juinor-KK’ carrying the largest stack of 292k was announced as the official winner. It was ‘IwillShovE’ who earned the second position payout.

Each SVS day on Spartan Poker ends with Hi-Fi being the last tournament. And yesterday hosted PLO Special which registered a total of 308 entries for INR 1,650 buy-in. This number collected a higher prize pool of INR 4.62 Lakhs that was well-received by the top 27 places locking at least INR 4,260 as min-cash. An anonymous player ‘nkss’ seized the winner’s title along with handsome prize money after the players settled for a heads-up deal which saw Amod Kelkar aka ‘Amod’ in the second position.