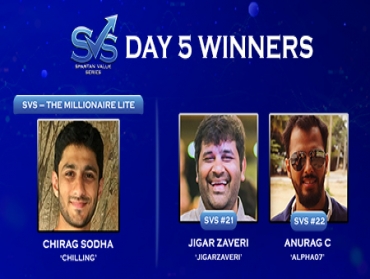 The first tournament of the final day kicked off at 12 pm yesterday fetching 391 runners after each paid INR 165 buy-in. Topping the list after the players struck a 4-way deal was Jigar Zaveri aka ‘jigarzaveri’ who had the largest stack of 447k while ‘pot-pan’ settled in the second position.

INR 385 was the buy-in to enter the second tournament of the day. The entire event registered a total of 403 entrants who eventually saw the collection of a higher prize pool of INR 1.41 Lakhs. The top 31 places ended up earning a min-cash while the one to take home the largest chunk was take away by Anurag Chaudhary aka ‘alpha07’ who defeated ‘haps1990’ in heads-up with his trip Eight.

Day 1C of the SVS Millionaire Lite took place at 4 pm yesterday, once again fetching a pretty good field. It was ‘Gappuu’ to come out on top and amass the largest stack of 3.41 million and became the overall chip leader. He is followed by ‘Doravad’ with 2.91 million.

A total of 226 entrants pounced on the field hunting for the winner’s prize money, after each paid INR 770. Outlasting the field was ‘StillDrawing’ who came out in the top and captured the winner’s title after the players struck a 4-way deal. However, the top 20 places ended up adding at least INR 2,278 in min-cash.

SVS ended with the final event being Electric Big Daddy which saw 395 entrants after paying INR 1,650 each. The top 39 finishers locked the min-cash and it was online reg ‘Sonudon’ who eliminated a prominent figure in the industry, Ashish Ahuja aka ‘Spewushhhiiiii’ in heads-up with pair of seven and nine kicker.

INR 10 Lakhs was assured to the first-place in The Millionaire Lite INR 35 Lakhs GTD. A total of 2,472 entries jumped on the field to overtake the advertised guarantee and create INR 37.08 Lakhs in prize pool and the top 195 players benefited from the same. Taking down the competition by defeating ‘Boller’ in heads-up in level 32 of the tournament was well-known circuit reg Chirag Sodha who dominated his opponent with two pairs of nines and fours.