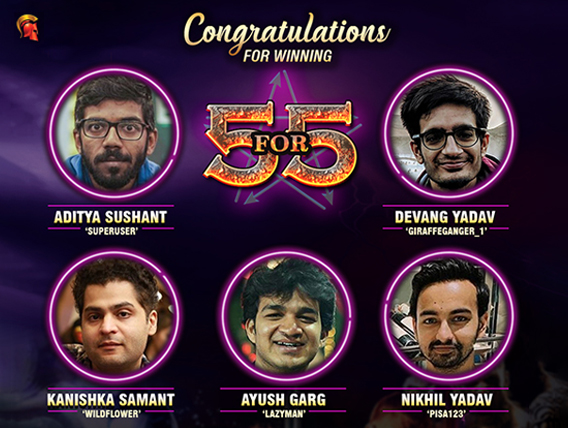 
Spartan Poker launched 5FOR5 INR 5 Lakhs GTD for top 5 in September 2018 and has been attracting a great number of players unfailingly. This tournament usually takes place on every month’s fourth Sunday, promising an enormous amount of INR 5 lakhs EACH to the top 5 players, just as the name suggests.

The tournament concluded at 4:41 am and 5 winners including Aditya Sushant aka ‘SuperuSer’, Devang Yadav aka ‘giraffeganger_1’, Kanishka Samant aka ‘Wildflower’, Ayush Garg aka ‘Lazyman’ and Nikhil Yadav aka ‘pisa123’. They all walked away with the same amounts in prize money!

The tournament began at 6 pm and lasted for 10 long and intense hours on Spartan Poker. In Level #48, the players posted the blinds of 36,000/72,000 on the table. Sushant entered the final hand with the largest stack. 4 out of 6 folded pre-flop as Sushant raised holding his Ts Th. ‘trickpoker’ was the last player to be eliminated. The player was holding Qs Ks and went all-in and lost with ace-high at the showdown to Sushant’s set of Tens.

The tournament halted after this hand with the final 5 survivors receiving the promised prize money. The star of the night was Sushant, the WSOP Bracelet winner who sits in the 6th place in India’s All-Time money list and total live earnings of $670k+.

Gutshot caught up with Samant, another frequent live and online player, to ask him about his experience playing the 5FOR5. He said, “With the unique structure of the tournament and it being quite reggy when down to 30 players remaining, I’m happy with the way I paced myself in the tournament without taking many risks. Congratulations to the other 4 who made it as well.”

Spartan Poker hosts a series of tournaments lined up for every day in the week. This October is finally about to witness some of the greatest action before the year ends. Grab your seats and start participating in Spartan’s October festivals with prizes worth INR 15+ Crores waiting to be won. Till then keep reading GutshotMagazine.com for all the latest updates!