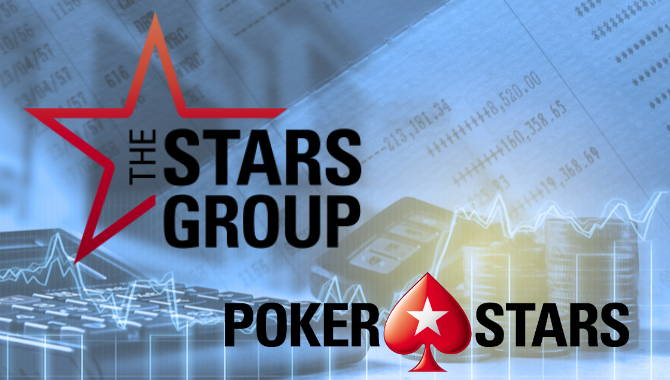 
The Stars Group is a Canadian gaming giant that is the parent company of PokerStars, the largest poker company in the world. The company is always in the news, with various acquisitions and expansion plans across the globe, the recent being a $4.7 billion acquisition of UK’s Sky Betting & Gaming.

Recently, the group posted their Q1 earnings and it looks like they have had a brilliant start to 2018, having reported a revenue of $393 million across all its poker, casino and sportsbook offerings. This revenue was for the first quarter of 2018 alone, ending 31st March 2018 and it indicated a 23.8% year-on-year growth as compared to 2017’s Q1 earnings.

They reported revenue of $317.3 million for the same period last year and as expected, live poker was the major contributor to this revenue. Live poker contributed $245.9 million to the group’s Q1 revenue, showing a 12.4% year-on-year (YoY) growth while the highest growth was seen in the casino and sportsbook section – jumping 55% to $134.5 million.

“The Stars Group’s strong first quarter results continued our organic growth trajectory. We are pleased with the performance of each of our verticals, poker, casino and sportsbook, which are benefiting not only from the continued success of Stars Rewards, but also from our strategy of focusing on the customer and continued improvement to our product offerings,” said the Stars Group CEO, Rafi Ashkenazi.

This was a record revenue for the group, which was slightly helped by favourable currency fluctuations. With the acquisitions of entities like CrownBet, Australia’s complete William Hill unit and the recent Sky Bet, revenue could head further upward for the Stars Group, having also recently launched PokerStars in India, where poker is rapidly rising and gaining popularity.

For more updates on the Stars Group and for poker news from around the world, keep following GutshotMagazine.com!