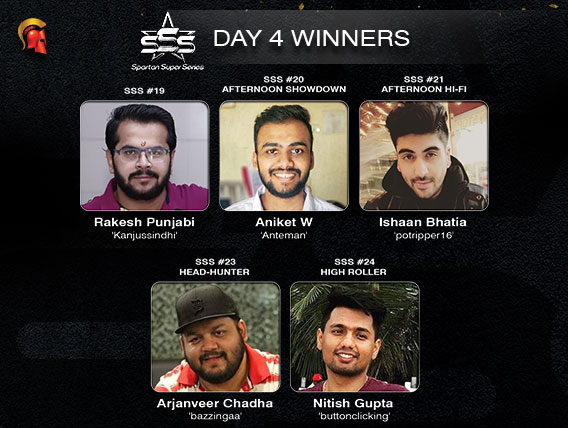 
The Spartan Super Series (SSS) is under rage! Another incredible day showered by huge cash prizes to the worthy winners and that’s all about SSS Day 4. Spartan Poker comes up with numerous challenges each day and several newcomers enter and win big. Yesterday added another spice hosting Thursday’s featured tournament Head-Hunter INR 15 Lakhs GTD. And here is a quick peek into the day…

The first tournament of the day kicked-off with a lesser buy-in of INR 165, enticing a massive field of 477 entries. The prize pool was eventually shared among the top 31 places with each receiving a min-cash of INR 660. Claiming the first-place prize money was Rakesh Punjabi aka ‘Kanjussindhi’ who defeated ‘ajit06020703’ in heads-up. Punjabi is a regular player on Spartan Poker.

If you have been part of online tournaments on Spartan, you must be knowing the online grinder Aniket W aka ‘Anteman’, a well-known player who triumphed yesterday’s Afternoon Showdown. He topped a field of 180 entries with each chipping in INR 2,200. The prize pool was distributed among the top 17 places for a min-cash INR 6,280. In the final hand of the tournament, both players settled for a deal. Aniket carrying the larger stack added a marvelous amount to his poker career.

A total number of 266 entries were observed in the third tournament of the day. These players entered for a buy-in of INR 1,100 and a share from the prize pool was taken away by the top 21 places receiving a min-cash of INR 3,750. The tournament was championed by Ishaan Bhatia aka ‘potripper16’ defeating ‘THEDONKKID’ in heads-up.

With a buy-in of INR 770, a total of 272 players registered in the tournament. The top 23 places received a paycheck of min-cash INR 2,610. The star of the match was ‘mittalp’ defeating ‘Megamindd71’ in heads-up.

Spartan Poker comes up with different feature tournaments for every day of the week and Thursdays are mainly for Head-Hunter INR 15 lakhs GTD bounty. The buy-ins increased to become INR 6,600, attracting a total of 236 entries. The online grinder, Arjanveer Chadha aka ‘bazzingaa’ crushed the tournament tonight by defeating ‘masterbluff’ in heads-up. Gradually, the top 27 places received a paycheck of min-cash of INR 15,000.

In Level #43, blinds at 18,000/36,000 ante 2,500, final hand of the tournament saw Chadha (8h Th) with 2 million chips against ‘masterbluff’ (4h 4s) with 263k chips. Both players put their entire stack in the middle while the board runs Qs 8d 9h Qc Ks, Chadha shows his two pairs of Queens and Eights over the latter’s two pairs of Queens and Fours. And that’s when Chadha pocketed the enormous amount along with the bounty!

The second last tournament came in with the biggest guarantee of INR 50 Lakhs along with a huge buy-in of INR 27,500. The guarantee was smashed to create a prize pool of INR 64 Lakh which was well-received by the top 31 places with a min-cash of INR 56,320. Powering through the field and claiming the enormous prize money was the online crusher, Nitish Gupta playing under the username ‘buttonclicking’, shipping the entire tournament after defeating ‘thepokerplayer’ in heads-up with his pair of Sixes against the runner-up’s Ace high.

Every SSS day ends with the final tournament being Hi-Fi. A massive field of 525 entries was observed with each chipping INR 1,650. The top 45 places received a paycheck of minimum amount INR 4,400. However, the biggest chunk of the prize pool was taken away by ‘varonir’. The final hand of the tournament saw a 3-way deal and that’s when ‘varonir’ collected from the pot and added another valuable title to his poker career.

For latest updates on poker news and tournaments around the world, keep reading GutshotMagazine.com and stay tuned!