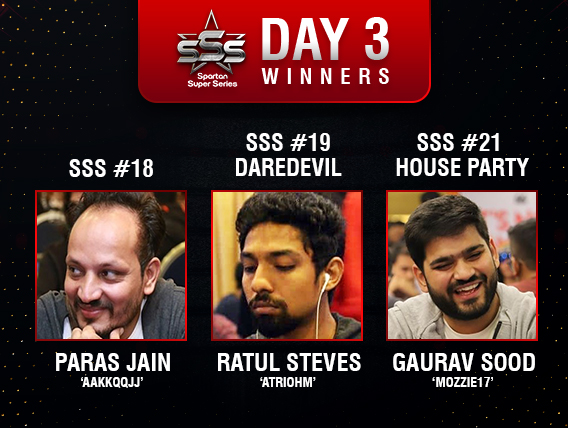 
Already three days into the fantastic Spartan Super Series (SSS) hosted on the leading online poker platform, Spartan Poker. Assuring 11+ Crore, each day more and more poker enthusiasts enroll themselves and walk home with a hefty prize money. Yesterday was SSS Day 3 with PLO High-Roller being the greatest attraction. And here is a complete summary of the winnersU…

The first tournament of the day kicked off with a total of 510 entries paying INR 550 to hunt for the first title. The guarantee was surpassed to become INR 2.55 Lakhs which was shared among the top 39 places but the one to take home the winner’s title was ‘Pokz11’ after the players settled for a deal which eventually saw ‘AnkNaga777’ in the second position.

A total of 478 runners registered in the tournament in the second tournament of the day. And this number led to the creation of INR 9.56 Lakhs in prize pool which was taken away by the top 39 players earning INR 6k at least. Online grinder Uttam Kumar Sinha aka ‘chinunew’ defeated Ayan Ray aka ‘interlalia_1’ in heads-up to bag the SSS title!

The buy-in went down once again to INR 1,100 which eventually pulled out a total of 673 entries, enough to drive past the advertised guarantee. It was ‘AK47_TLB’ topping the field and grab winner’s title after his opponent ‘hiker53’ was defeated with two pairs of 6622 over his single pair of 22. However, the top 55 finishers didn’t return empty-handed.

It was only last week that circuit grinder Paras Jain aka ‘AAKKQQJJ’ took down SSS Event #5 Ultron and once again Jain rode past a field of 428 entries to win his second SSS title in the ongoing series. It was ‘RedKane’ to end up in the runner-up position after both players struck a heads-up deal in level 46 of the competition.

A Saturday feature DareDevil captured the attention of great many players as the advertised guarantee was crushed to create INR 14.90 Lakhs in prize pool. This was shared among the top 27 places only walking out with at least INR 14k as min-cash. After the players settled for a 3-way deal it was Ratul Steves aka ‘Atriohm’ to top the list while Chiraag Patel aka ‘Trapdoor’ ended up in the second position.

INR 11,000 was the buy-in to enter the biggest tournament of the day which fetched a total of 236 entrants. Capturing the first-place prize money was ‘jammy’ who defeated ‘Sharkyshark in heads-up. The entire event saw only the top 23 places securing a portion of the final bigger prize pool of INR 23.60 Lakhs and locking at least INR 27k as min-cash!

This was the last event of SSS Day 3 which garnered a total of 658 entries after each one paid INR 2,200. Gaurav Sood aka ‘mozzie17’ conquered the field and seized the first-place cash prize after eliminating Laksh Pal Singh aka ‘LuckyBhai$’ in level 47 of the tournament. However, the event collected a bigger prize pool of INR 13.16 Lakhs which was shared among the top 55 places who walked out with a min-cash of INR 6,448.