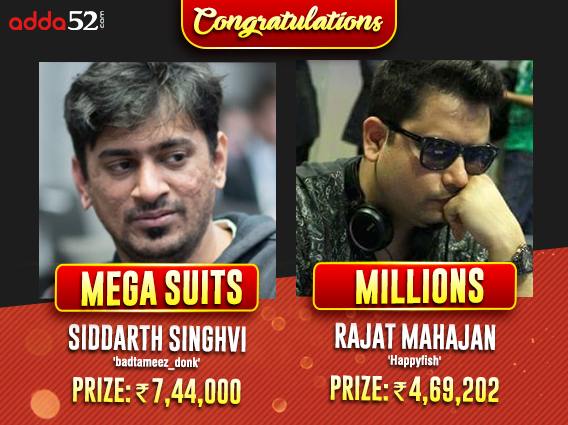 
Sundays are always fun on most major online poker platforms in India and Adda52 is no exception. Every Sunday, they host two major tournaments for their loyal user base, with a handful of these players walking away with massive bankroll boosts. Yesterday was another Sunday and we’re bringing to you a summary of what went down on the virtual felts…

INR 5,500 is the buy-in to this event and reaching the money in such a massive tournament is quite an achievement, so imagine how big it is to win such a title. Last night, it was Pune-based Siddarth Singhvi who won the tournament, a player who has been taking down quite a few titles on Adda52, other online platforms as well as in live tournaments.

Playing as ‘badtameez_donk’ on Adda52, Singhvi went past a strong field of 429 entries in order to be crowned winner last night. Beginning at 5pm, the tournament went on for over 9 hours, ending at 2:19am this morning. Eventually, 43 players were paid a minimum of INR 16,500 and many big names finished in the money.

Singhvi was elated after the victory and when he spoke to Gutshot, he said, “I have been a part of Mega Suits FT a few times in the past but always missed the gold. This time around, I’m very happy as I finally managed to close it down!!”

Two tournaments running simultaneously but this one has a higher buy-in of INR 11,000 while beginning slightly later at 8pm. However, the similarity is that you can’t get to the top if you’re not among the top players in this country. Last night’s Millions went on till exactly 4am this morning, ending an 8-hour grind when Rajat Mahajan was crowned victor!

Mahajan plays as ‘Happyfish’ on Adda52 and has won a few titles across most major platforms, including a smaller guarantee tournament a few days back on Adda52. Here, 184 entries took part with only the top 19 being paid out with the min-cash set at INR 20,000.

When Gutshot spoke to Mahajan, he said, “After a long time, I’m doing good on Adda52. I shipped Maverick earlier this week, and now, more significantly, cracked Adda52 Millions. This is my first major title on Adda52 and I’m relieved to break the hoodoo. The FT was full of seasoned pros such as Sriharsha D, Goonjan Mall and Siddarth Singhvi. I was chip leading when we were 3 handed left but then decided to make a deal.”

For all updates on Adda52 tournaments and other major poker happenings from around the world, keep following GutshotMagazine.com.