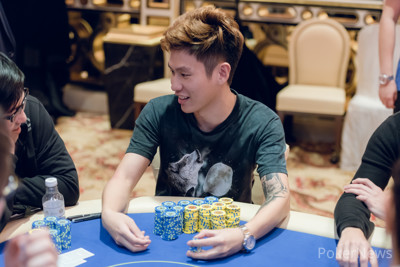 
The Poker King Cup (PKC) Macau has been an exciting series so far, with Japan’s Tokuho Yoshinaga winning the High Roller and being the biggest winner of the series so far. A couple of days are left to be played and at the end of that, we will have a new PKC Main Event Champion as well.

From the original field of 518 entries, 247 survivors hit the tables on Day 2 and after an action-packed day, we’re down to just the final 62 survivors. Heading these survivors is China’s Shi Qiang Lin, who is sitting pretty at the top of the chip counts with a gigantic stack of 904,000 chips, which is almost 23 Big Blinds more than the next best.

Also from China is Sun Bin (720,000) who is second in the chip lead while Korea’s Jeho Lee (666,000) rounds out the top three after Day 2. Lin began to assert his dominance towards the end of the day when he sent a couple of players to the rail and increased his own stack to snatch the lead from Yue Feng Tang.

63 players are being paid out a minimum cash prize of HKD 27,900 in this tournament, so all the players will be paid out when they resume on Day 3 today. The competition is heating up and we expect even better action on Day 3 in a field which is dominated by Chinese poker players.

All these players will battle it out for the top prize of HKD 1,464,000 (~$187,239) and you can get all updates from the PKC Macau Main Event here on GutshotMagazine.com.