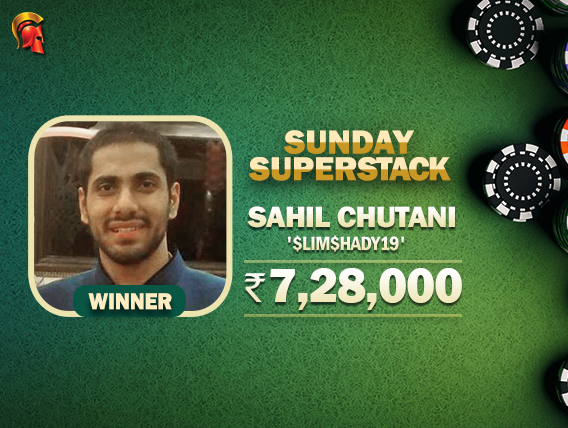 
One of the most reputed brands in the Indian online poker industry is undoubtedly The Spartan Poker. The company hosts so many high value tournaments and series regularly that it instantly puts them in the upper echelons of this scene. Yesterday being a Sunday saw the platform studded with various high stakes events, and that too being the first Sunday of the month, saw their unique 2.o.K awarding INR 15L each to the top two winners.

The Sunday SuperStack INR 25 Lakhs GTD was also among the ones to be hosted on Spartan yesterday. The tournament started at 7.30 pm and attracted a huge field of 560 entries (including 61 re-entries and 206 re-buys). For a buy-in of INR 5,500, the guarantee was crushed to create the fresh prize pool of INR 28,00,000. Breaking guarantees by such a huge margin has become quite a regular affair on Spartan and comes as no surprise, given its stature and dedication to the game and this industry.

The winner to emerge at 2.44 am this morning was none other than the well-known player Sahil Chutani aka ‘$lim$hady19’. He took home INR 7,28,000 as the 1st place cash prize after beating ‘Johnnymaddog’ who had to settle for runner-up place and INR 4,48,000, not at all a bad amount for finishing 2nd.

The last hand of the SuperStack yesterday saw Johnnymaddog going all in pre-flop with an over 3:1 chip deficit. Chutani called and the board came to 4c 5h Js Jh As, making Chutani’s 6c 6s reign supreme over his opponent’s Kd 3c.

Chutani has accumulated plenty of online cashes from various reputable platforms in the past. Along with that, he also ardently plays in live events, having visited poker hotspots like Macau and Manila previously to play in the international tourneys. His best recorded live cash came at the APPT Macau in March 2018, where he won $21,352 for finishing 15th in the Main Event. Chutani’s win last night must’ve felt like a huge accomplishment because the Final Table itself was packed with a lot of talented regulars.

Keep reading GutshotMagazine.com for more such tournament results, updates, announcements and for general poker news from around the world.