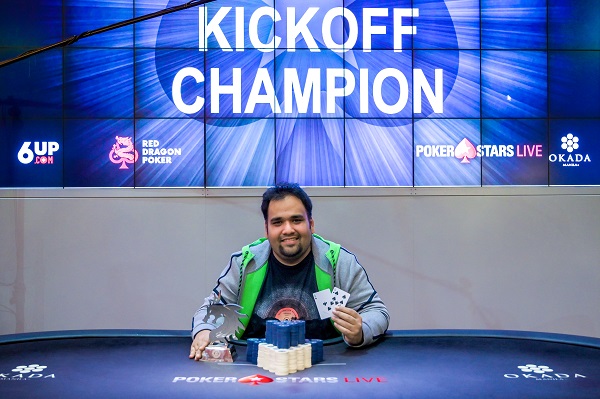 
The new year has well and truly begun on a good note for poker pro Sahil Agarwal. In the past, we’ve seen Indian poker players win massive titles abroad and the latest to do so is Agarwal, who won the opening tournament at the 2020 Red Dragon Manila, a highly popular tournament series presented by PokerStars LIVE.

The series kicked off two days ago at the Okada Manila with Event 1: Red Dragon Kickoff that had a PHP 20,000 buy-in attached to it. Indians have now become a regular part of tournaments taking place in Asia and it was the sweetest start possible for Team India as Agarwal went on to ship the 2-day tournament, winning the biggest share of the PHP 6,879,240 prize pool.

He was one of 394 entries in the Kickoff Event and was in fact the only Indian to walk away with a pay-check among a total of 48 players who received prizes. The min-cash was set at PHP 32,500 but Agarwal only had eyes on the top prize, which he laid hands on after beating another known name in heads-up, Valeriy Pak.

Pak is known more for winning the WPT Korea Main Event in 2018 and here, he collected PHP 990,000 from the prize pool, unable to get past our Indian pro. Agarwal has had quite a few deep runs in Asian tournaments in the past and he seems to love Manila in particular, having also recorded his largest live cash in this city.

In July 2019, he ended as runner-up among 124 entries in the APPT Manila High Roller for a whopping $87k in prize money. Here, he managed to collect the top prize of PHP 1,575,000 (~INR 22.21 Lakh) after beating the field in the Kickoff Event. It’s just the start of the series and we hope to see plenty more Indian successes like this one in the days to come!

For similar updates on the top Indian and international poker tournaments, stay tuned to GutshotMagazine.com.