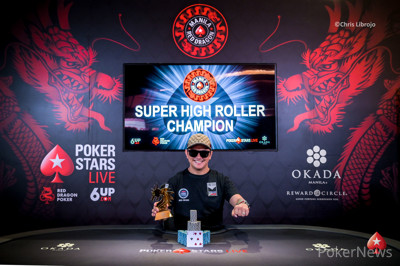 
The new year is unquestionably heavily scheduled, and it has been a thrilling start so far. The Asian Circuit is decorated with some of the popular festivals and currently, the 2020 Red Dragon Manila is underway presented by PokerStars LIVE. And it was yesterday that the Super High Roller came to a standstill crowning Filipino Lester Edoc for trouncing Florencio Campomanes in heads-up in the dazzling Okada Manila.

The entire tournament saw a small bunch of 30 players, each of whom paid a fixed buy-in of PHP 500,000 and eventually two days into the event saw the top 5 players ending in the money for a min-cash of PHP 1,341,500, a slice from an incredible prize pool of PHP 14,113,500. However, it was Campomanes who initiated the day becoming Day 1 chip leader to build a massive stack of 1,665,000 chips.

A total of 11 players entered Day 2 at 1 pm local time, taking their seats in the final table. It didn’t even take 20 minutes before the heads-up began. But prior to that, the first casualty was Yufei Hui who was eliminated by Nang Quang Nguyen. Followed by Meng Li who busted in the 10th place after Lei Yu doubled up with his higher pocket pair. Eventually, even Le couldn’t stand Campomanes’ flush to rest in the 9th place. Further into the tournament, the native player railed out Xiao Ling Li, the only woman to enter the Super High Roller when she shoved with pocket jacks and was called by Campomanes who held tens and turned a set to full house.

The tournament progressed, bringing down one after another and eventually the event came down to two players, Edoc and Campomanes who went into heads-up play with pretty even stacks. Edoc lost his hard-earned stalk and that triggered his journey to the top. In the final hand, Campomanes shoved 15 big blinds in with his jack-ten suited and Edoc called with Ace-five. The flop came 8d 2d 2s, keeping the latter ahead. The turn 4h made no change and the board completed with the river Ad for Edoc who made two pairs while Campomanes headed to the payout desk. Finally, Edoc triumphed the Super High Roller, lifting his trophy and adding a marvelous PHP 5,222,000 (~INR 73.71 Lakhs).

The 38-year old native player expressed, “This is one of the best final tables ever! I was short-stacked all the way, from nine players until we got to heads-up then became chip leader, then got down to eight big blinds, then came back to win…” This has been Edoc’s second-largest live career victory after finishing in the runner-up position in APPT Manila Super High Roller in July 2019 for PHP 6,016,000.

This has been an incredible start to 2020, especially for the Indians as the first event, Red Dragon Kickoff was taken down by India’s Sahil Agarwal, taking away the biggest slice from a prize pool of PHP 6,879,240. However, the 8-day long event is expecting less Indian participation due to the Baazi Poker Tour (BPT) and India Poker Championship (IPC) to cover the second and third week of January, respectively. So, stay tuned for further updates and other poker tournaments and news taking place around the world and keep reading GutshotMagazine.com.