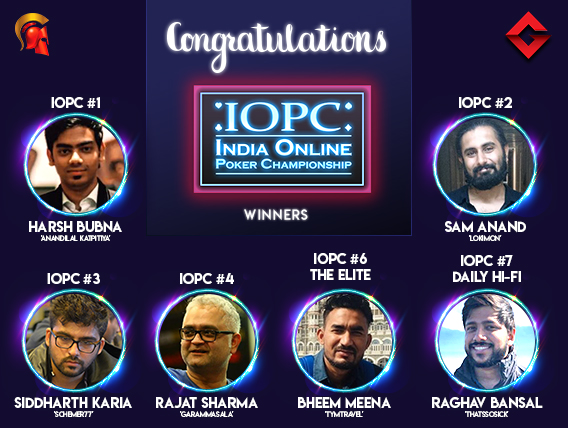 
The day we were all awaiting finally arrived yesterday. The most loved and record-breaking India Online Poker Championship (IOPC) takes place twice a year on Spartan Poker and yesterday, it was time to kick off yet another online poker series, this one guaranteeing a massive INR 16+ Crore guarantee, which is higher than what’s being offered by some of the top European websites.

Last night was Day 1 of the latest IOPC series on Spartan and it was highlighted by some amazing tournaments, including Day 1A of the Millionaire X5. This is the first IOPC series which has multiple Millionaires and later in the series, an Indian Main Event record tournament will be played, with the INR 3 Crore guarantee being set for the Main Event. Keep reading for our complete summary of IOPC Day 1…

The first tournament of the series kicked off in style with a massive field of 1,237 entries registering to break the guarantee and post a new prize pool of INR 6,18,500, with the buy-in at INR 550. From them, the top 87 places were paid with the min-cash set at INR 1,917, but everyone was fighting for the top prize. That prize eventually went to Harsh Bubna aka ‘Anandilal Katpitiya’ who took home a decent bankroll addition along with a prestigious IOPC title. He was up against ‘GURUGI’ in heads-up and the two struck a deal when they were nearly equal in chips.

Here, the guarantee stayed the same but the buy-in increased to INR 2,200, with 426 entries registering to crush the guarantee and create a prize pool of INR 8.52 Lakh. From them, only the top 31 places were paid and the player who went on to ship it was Sam Anand aka ‘Lokimon’ who won a handsome amount from the prize pool after beating Bhanu Prakash aka ‘spectre’ in heads-up. The last hand saw spectre shoving pre-flop with A3 and getting a call from Anand who had pocket Sixes. The board ran out Board 6♠ K♣ K♠ 4♠ K♦ and Anand won with a full house over Prakash’s three of a kind Kings.

With the buy-in at INR 1,100, a massive field of 633 entries participated and once again, the guarantee was cleared by a long way, creating a new prize pool of INR 6,33,000. This was shared among the top 47 players with the min-cash at INR 3,608 and eventually, it was Siddharth Karia aka ‘schemer77’ who won the title. He was similar in stack sizes with ‘Uknapdmj’ and ‘luckibox’ which led to them striking a 3-way deal to signal the end of the tournament. When we reached out to Karia regarding this win, he said, “It was a really strange tournament for me, having lost at least 6 flips and even 70/30’s straight before late reg ended. However, I ran well when it mattered and won it. Cheers.”

INR 15 Lakh GTD to the top 5 places is the uniqueness of this tournament, for the first time having multiple starting flights. With the buy-in at INR 8,800, the turnout was amazing as 665 entries joined on Day 1A and a total of INR 53,20,000 was added to the Millionaire X5 prize pool. There was a lot at stake and at the end of Level 25, play ended, and 66 players survived the flight, carrying a stack to Day 2. Leading the pack is none other than Rajat Sharma aka ‘Garammasala’ who ended with a massive chip stack of 390,274. Close behind him is ‘iceiceice’ who has 378,994 while Devang Yadav aka ‘giraffeganger_1’ ended the day with 295k in chips. Quite a few others qualified and for those who didn’t there’s always Day 1B which will take place later today.

Thank God It’s Friday is another tournament that takes place on Spartan Poker every Friday night and last night, the guarantee was smashed once again, with 1,153 entries each paying INR 1,650 to join the tournament. The prize pool was taken all the way up to INR 17,29,500 and by the end of the night, it was ‘desithug007’ who walked away with the biggest prize and an all-important IOPC title. In heads-up, he was up against Abhishek Kumar aka ‘allout1’ and they decided on a heads-up deal when they were almost equal in stacks. They took away similar prizes and the tournament ended at INR 4:02am after an 8-hour grind.

As the name suggests, this is a tournament for the most elite group of players in India. The guarantee was absolutely smashed with 410 entries each paying INR 11,000 as the buy-in, taking the prize pool all the way up to INR 41 Lakh, where the top 39 places shared the prizes. Ending at 5:20am this morning, it was a long grind which saw Bheem Singh Meena aka ‘TymTravel’ emerging victorious and bagging a massive top prize. In heads-up, he got past ‘ganesha3009’ who also took home a pretty handsome prize for second place. Among those to cash in this tournament were Akash Malik (37th), Gaurav Sood (35th), past IOPC Main Event winner Ashish Munot (33rd), Anant Purohit (30th), Sam Anand (22nd), Jayjit Ray (21st), Vivek Rughani (20th), recent IPC Main Event winner Rubin Labroo (15th), Sahil Agarwal (14th), Sajal Gupta (13th), Anurag Srivastava (10th), Raghav Bansal (6th) Aditya Sushant (4th), and some other known names.

The last event of the night had a buy-in of INR 2,200 and a field of 722 entries joined to take the prize pool up to INR 14,44,000 which was shared among the top 63 players of the night, each bagging a minimum prize of INR 5,776. One of India’s top poker players, Raghav Bansal aka ‘thatssosick’ ended as the winner, taking home a handsome top prize for besting this field. In heads-up, he was up against Puneet Dua aka ‘neo888’ and an A-T straight was good enough to beat Dua’s pair of Kings.