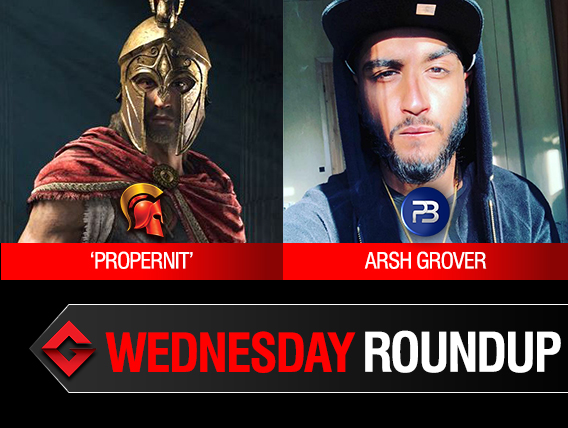 
Hitting the mid-week, the online felts continue to grow steamier with each day. By now, the poker enthusiasts know all about Wednesday fever assuring bundles of cash prizes. Spartan Poker hosting Destiny 12.0 that runs 10 weekly tournaments and all 10 winners take their seats in Destiny SnG Finale, eventually, only the top 3 places receive a travel package worth 10 Lakhs to Las Vegas! While on the other hand, PokerBaazi’s G.O.A provides all expenses for a trip to the heart of poker, Goa. With incredible opportunities as such, let’s have a look at Wednesday majors…

Following the path of last week’s winner Amarjeet Singh, an anonymous but online regular ‘propernit’ triumphed Destiny 12.0 INR 30 Lakhs GTD on Spartan Poker last night. Over 8 hours into the competition, the promised amount was seen to be surpassed, generating a slightly higher prize pool of INR 30.95 Lakhs. The top places walked out after receiving a slice from the same. Eventually, the tournament ended with a heads-up deal between ‘propernit’ and the WSOP bracelet winner Aditya Sushant aka ‘SuperuSer’. With ‘propernit’ carrying a larger stack of 5 million ultimately seized the first-place prize money along with a seat in SnG Destiny Finale!

Dominating a field of 341 entries, a well-known prominent player in the circuit Arsh Grover aka ‘Button_Hai_Bro’ took down G.O.A INR 20 Lakhs GTD on PokerBaazi yesterday night. Grover captured a spectacular winner’s prize of INR 3.8 Lakhs after defeating Siddharth Chaturvedi aka ‘siddchat’ in heads-up who bagged INR 2.7 Lakhs for the runner-up position.

Adda52’s flagship Wednesday event, Maverick INR 10 Lakhs GTD attracted a field of 420 players, with each one registering for a buy-in of INR 2,500. The standout performance was given by ‘prithvi221’ who shipped the entire tournament for INR 2.4 Lakhs after defeating Karan Radia aka ‘Reg_Slayer’ in heads-up. At the end of the competition, Radia walked out with INR 1.5 Lakh for resting in the runner-up position.

The headlining tournament last night on PokerStars was Night on Stars INR 5 Lakhs GTD. For a buy-in of INR 2,200, a total number of 269 players took their seats and eventually only a bunch of top 44 places earned. However, the first-place prize money of INR 95,805 belonged to Gaurav Mittal aka ‘F1SH@SH4RK’. The competition ended with a heads-up deal between Mittal and ‘50nA’ and the former’s larger stack made him the official winner while the latter settled for INR 82,901.

9stacks hosted Stackup Turbo INR 1 Lakh GTD last night at 7:59 pm. For a buy-in of INR 1,100, a total of 117 players joined the tournament with only 12 places receiving a share from the prize pool. An anonymous player and circuit reg ‘Once’ emerged triumphant after beating Murali B aka ‘Antrose’ in heads-up for INR 28,000. The runner-up managed to obtain INR 20,000.

Anuj Yadav aka ‘brocLesnar95’ (5th), Shashank Shekhar aka ‘biharibhaia’ (9th) were among few other notable players to cash.