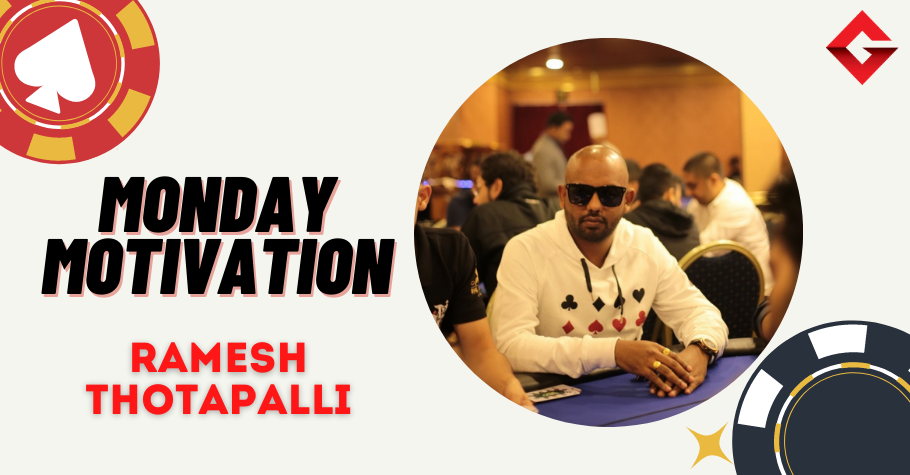 
Ramesh Thotapalli or ‘RRT’ as he is affectionately known, is not a stranger to the Indian poker community. His poker journey began on one fateful trip to Goa with his friend back in 2010. It was under the dazzling lights of Casino Pride that Thotapalli fell in love with the game. Watching his friend cash out INR 75,000 with a INR 10,000 buy-in gave him just the right incentive to take an interest in poker and learn it.

Now almost after a decade, this Visakhapatnam born player has continued to hone his skills and is a well-liked figure in the Indian poker scene. His passion for the game has taken him to places like Manila for the Asian Poker Tour (APT), Macau for the Red Dragon, and Australia, Melbourne where he played the Aussies Millions and Melbourne Poker Cup. In the domestic circuit, he has managed to ship the Joker on 9stacks, Elite on Spartan Poker, and made multiple cashes and final tables.

However, one thing that this MBA graduate from MIT will always be known for is the creation of the Facebook group, Indian Poker Bakchods (IPB). What initially started out as an escape from confusing poker politics happening in other groups soon gained a cult following on the platform. When asked about his Facebook group, Thotapalli replied, “If you want to understand the jokes happening on IPB you have to be an active member of the Indian poker playing community. All the jokes are targeted on recent incidents and you can find a lot of laughable content here.” With him at the helm, we’re pretty sure there is never a dull moment on IPB. 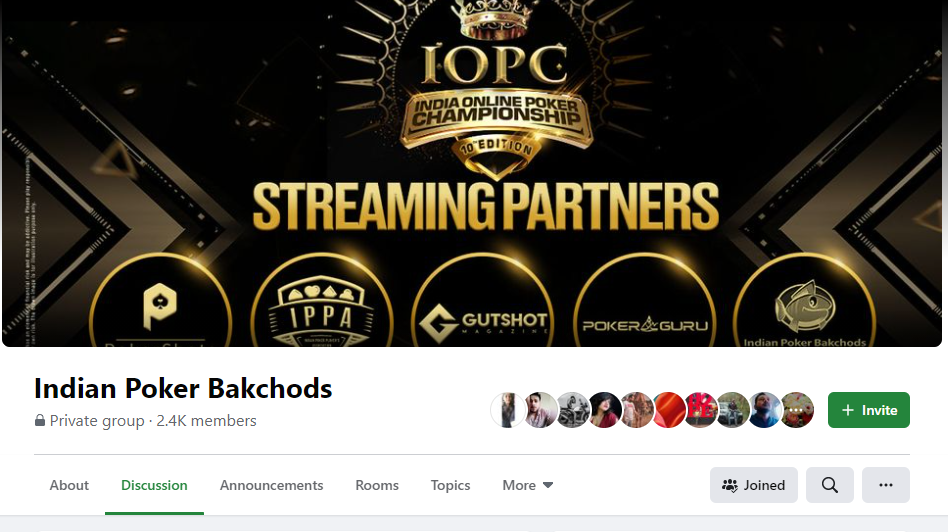 A few months back, India Poker Championship’s (IPC) Final Table Series (FTS) held its first ever live stream and invited the IPB founder as one of its commentators. Well-known poker players like Maria Ho, Kevin MacPhee, Sam Razavi, and Radhika Shankar were also a part of the live stream. “It was my first experience as a commentator and I had a lot of fun. I definitely enjoyed the parts where I was making fun of people,” said Thotapalli.

One of his antics on the stream even went viral. It was the part where he made a certain gesture while the commentators were talking about the player Srihari Bang. During the livestream, he also got in a little trouble with people when he started anti railing his friends who made it to the final tables. “I got a few comments and feedbacks saying that I was a commentator and should therefore have an impartial view. But I had previously mentioned that I was not there to be neutral but rather judge people,” he explained.

The conversation then shifted towards the entire COVID-19 pandemic and how it hit the world pretty hard.

With a nation wide lockdown forcing many to people adjust to a work from home lifestyle, what major changes did you have to make?

“I had to buy a lot of shorts and vests that I could wear at home. I had to also set up a mini office in my house where I could keep working and grinding whenever I could.”

The New Year is here and we’re sure many players are just waiting to get back to live poker. What are your poker plans for this year?

“My plans are pretty clear. I have been hosting a lot of cash games across the country and also plan to host more games outside India. This is to give all the people in the poker playing community, who are just rearing to get into the live felts, an opportunity to play, party, and have some fun.”

You once mentioned that one of your dreams was to win a World Series of Poker (WSOP) Gold bracelet, are you still working towards that or has your goal changed?

“The goal of winning a WSOP Gold bracelet has not changed. However, I do plan to organize events which are as big as WSOP and maybe even better. I’m also planning to be an organizer in the future. Hopefully, we could get WSOP to be hosted in India sometime soon.”

Beside poker, what are your other interests? Any hobbies?

“Besides poker my other interests lie in the supply chain industry and financial markets. I love traveling to amazing places and spending quality time in upstanding properties. I’m also a big fan of watersports.”

Lastly, when asked about his IOPC plans, Thotapalli replied, “I’ll be playing all the major flagship tourneys on IOPC. I’m going to go right after the crown and fire as many as bullets possible to get the pole position. Let’s hope I ship this one.” While bringing the conversation to a close, we asked him to tell us one thing that no one knew about him, in a playful tone, RTT replied saying, “I’m a man of many things and a part of it is being mysterious. So you have to know me to understand what I’m up to at any point in time.” 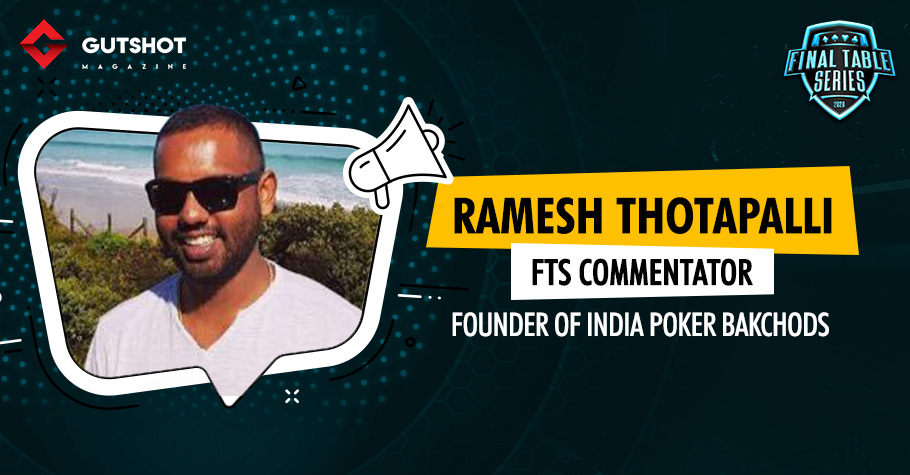 What Did Ramesh Thotapalli Do That Shocked Poke... 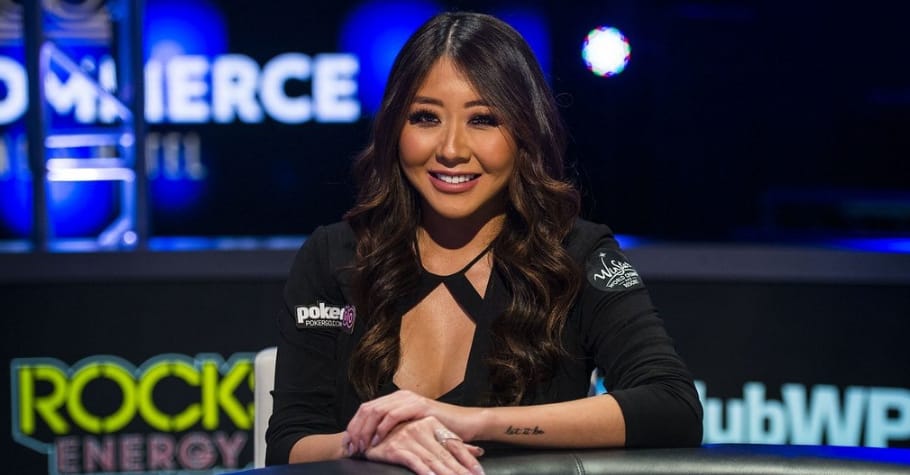 Catch Maria Ho As A Guest Commentator For FTS M... 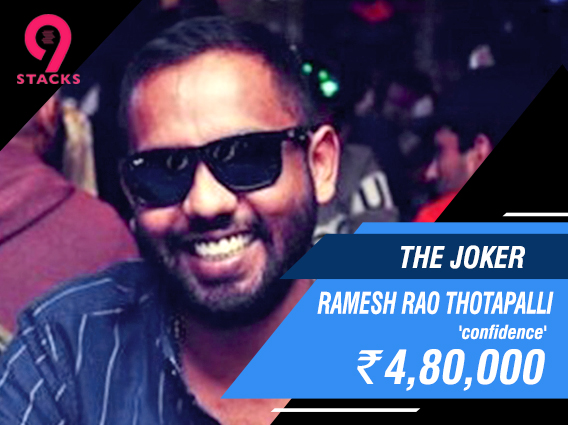