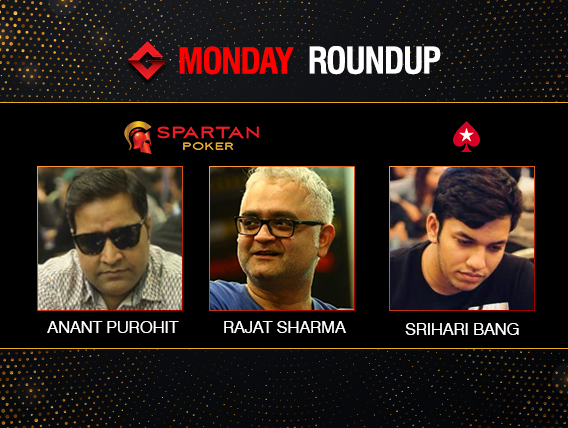 
It was a big weekend across Indian online poker platforms and the thrill continues! Monday night wasn’t the same old slow-paced as Spartan Poker added a second tournament on its daily schedule! Deep Freeze INR 6 Lakhs GTD kicked off at 9:30 pm running simultaneously with the popular ReCharge INR 12 Lakhs GTD. Another attraction on the virtual felts was PokerBaazi’s The Bout promising INR 10 Lakhs and PokerStars’ Monday Hustle. And here is a complete summary of Monday majors…

Spartan Poker now has two daily features but ReCharge INR 12 Lakhs GTD is among the popular Monday tourneys. A total of 665 entrants pounced on the field after paying INR 2,200 to collect the final prize pool of INR 13.30 Lakhs which was shared among the top 63 places. Coming out on top was a well-known figure in the industry, Anant Purohit playing under the username ‘Pro’ and adding the first-place prize money after the payers settled for a heads-up deal which saw Amit Sahu aka ‘Magnemo’ in the runner-up position.

Always coming up with action-packed tournaments, Deep Freeze INR 6 Lakhs GTD will be held each Monday on Spartan Poker. The battle began at 9:30 pm, eventually garnering a total of 104 entries for INR 6,600 buy-in, enough to drive past the advertised guarantee and create INR 6.24 Lakhs in prize pool. It was only Sunday when circuit popular Rajat Sharma gave an outstanding performance by taking down Millionaire Lite. Once again, Sharma aka ‘Garammasala’ topped the field after the players struck a 3-way deal which saw Ujjwal Narwal aka ‘Lord Hendrix’ in second place and Sanket Arora aka ‘GHOSTF@CE’ in the third position.

PokerBaazi’s Monday flagship The Bout INR 10 Lakhs GTD pulled out 415 entries after each paid INR 2,750 to join the field. Online reg Harsh Kumar aka ‘100crdream’ captured the largest chunk of the prize pool out of the 54 finishers who ended in the money. Kumar beat Guruprasad Gupta aka ‘fish_calling’ in heads-up to bag INR 2.08 Lakhs in prize money. Gupta earned a second-place payout of INR 1.46 Lakhs.

Online crusher Srihari Bang has been making deep runs this month, last week shipping the Spartan Elite title. Bang aka ‘bangbang1999’ emerged victorious in PokerStars’ Monday marquee last night too, Monday Hustle INR 5 lakhs GTD. A total of 146 runners entered the field after paying INR 3,300 out of which only 23 could end up earning a min-cash. Bang eliminated ‘(Giz^zY)91’ in heads-up and added INR 1.04 Lakh in prize money.

9stacks’ headlining tournament Hercules INR 2 Lakhs GTD began at 8 pm pulling out 80 entrants who paid INR 2,200 individually. The top 9 places locked a min-cash, but it was ‘WizardofOZ’ who bagged the first-place prize money of INR 58,000 beating ‘Enchanter’ in heads-up who secured INR 40,400 in the runner-up position.

Other notable names earning a payout include Ashish Narwal aka ‘SANShISh’ (5th), Ajaj ‘H4X0R’ Ahmed (9th) and so on. For more updates on the top online and live poker tournaments in India and around the world, stay tuned to GutshotMagazine.com.